Australian player Josh Dunstan did something players only dream of doing – hitting a triple hundred in a limited overs game. Dunstan scored 307 runs in a match which was 35 overs per side. The historic innings was played in a local cricket game between West Augusta and Central Sterling at Braddock Park. The Port August truck driver single-handedly took the game away from the opposition by hitting 40 sixes in his innings ie 240 runs. Dunstan reached his triple hundred in the 27th over though he got out in the 30th over. The West Augusta batsman scored 354 runs for 9 wickets. He took the opposition by storm and scored 86.72 per cent of his team’s runs. Other than Augusta, just one other batsman could score in double digits while six batsmen recorded ducks.

Dunstan was ecstatic and shocked at the same time after his innings. He had a few revelations too, He told Adelaide Now,

It hasn’t sunk in yet — I’m actually in shock still. I’d had a few quiet beers with my mates the night before, so I wasn’t thinking about too much when I got out there other than hit the ball and try not to get out. I got to 100 and the boys were cheering me on. It felt like a few overs later I was on 200 and then I went on with it. I was pretty happy with that. 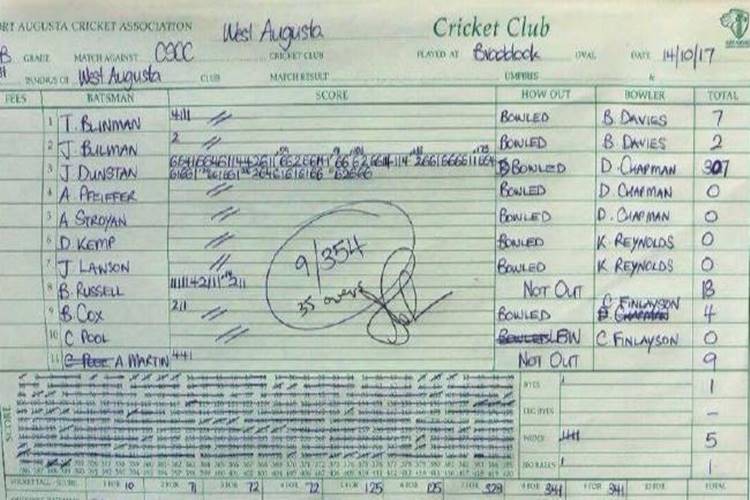 The 32-year-old put on a partnership of 203 runs for the seventh wicket with Ben Russell. The truck driver from Holcim expressed his emotions and style of play as well. He added,

I’m known for hitting a lot of big sixes — I don’t want to run. I edged one to the keeper but he dropped it, so I probably owe him a few beers if I see him. Then Ben did a good job sticking around with me and got me on strike when he needed to.

He made a bizarre statement as well,

When I was walking off, everyone was clapping me so I felt a bit embarrassed. I shook all the boys hands and then got on with the bowling.

Dunstan has gone down in record books to better Viv Richards’ feat o the highest percentage of runs in an innings, a record that stood for 33 years.