With Alastair Cook’s 243 against West Indies at Edgbaston, the English opener finds himself just 4,353 runs shy of Sachin Tendulkar’s 15,921 in Tests. With age on his side and at least three more seasons of cricket expected to be played, it seems that the inevitable will happen. Sachin Tendulkar has played in a whopping 200 Tests for India and has 51 centuries against his name. Sachin Tendulkar also averages an astounding 53.78. But it seems the English southpaw is bound to eclipse that figure.

Other greats who couldn’t surpass behind Sachin Tendulkar in this coveted list are, Ricky Ponting (13,378 runs), Jacques Kallis (13,289 runs), Rahul Dravid(13,288 runs), Kumar Sangakkara (12,400 runs), Brian Lara (11,953 runs), Shivnarine Chanderpaul (11,867 runs), Mahela Jayawardene (11,814 runs) and then comes the only player who has the ability to surpass Tendulkar’s record – Alastair Cook (11,568 runs). On this coveted list, the Englishman is the only cricketer who is actively playing cricket at the biggest stage.

So will he break Sachin Tendulkar’s record? It seems in all probability he will. To focus more on cricket, Cook has given up playing T20 cricket, the last T20I he played in English colors was way back in 2009. Cook remains the only threat to surmount the master’s record, who too played his last Test against West Indies in Mumbai, Wankhede.

Sachin Tendulkar played the game at the highest level for 24 odd years, which is a long time considering that to maintain fitness for such a long time is quite surreal. 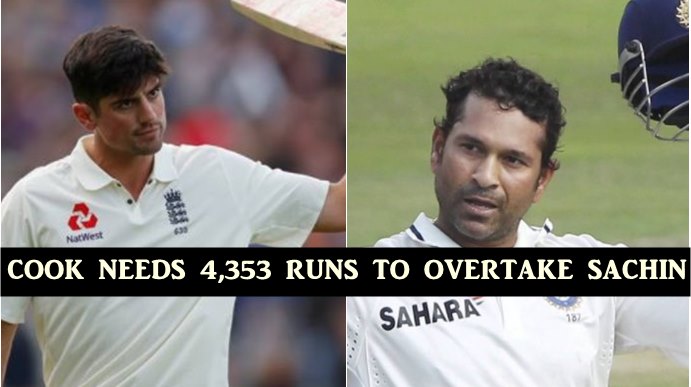 By the looks of it, it should take Alaistar Cook a couple of more seasons to cross the threshold. With England playing at least 15 Tests in a single calendar year (they played 17 in 2016), there are greater opportunities for him to seriously challenge the record.

England is currently playing against a weakened West Indies team and hence more is expected of England’s opener, who happens to be in good form.