In her quest for justice, an 18-year-old rape survivor from Unnao in Uttar Pradesh has been protesting against police inaction for last two days. The allegations have been levelled against Kuldeep Singh Sengar, a BJP MLA, who was also accused of assaulting and threatening the survivor’s kin. On Sunday, the girl and her family attempted suicide outside the residence of Uttar Pradesh chief minister Yogi Adityanath. A day later, her father died in judicial custody.

Lucknow: A woman & her family allegedly attempted suicide outside CM Residence. Her family alleges the woman was raped by a BJP MLA & his accomplices & no action is being taken. pic.twitter.com/Srl5yQqhXP

According to the complaint filed by the family of the rape survivor,  the Unnao MLA and his accomplices gang-raped the girl last year. When the kin filed a police complaint, they were thrashed by him and were also threatened.

“I was raped. I have been running pillar to post for the last one year but no one is listening to me. I want to see all of them arrested, otherwise, I will kill myself. I had even approached the CM to no result. When we lodged an FIR, we were threatened,” the survivor told ANI.

In June last year, the girl was kidnapped by the girl by two youths of her village for marriage. Few days later, it was found that the girl was raped by three men – Shubham Singh, Naresh Tiwari and Brijesh Yadav. They were then arrested under sections 376 D (gang-rape) of IPC and section 3/4of the Protection of Children from Sexual Offences (POCSO) Act. Later, when one of the accused’s mother took the girl to MLA Kuldeep Singh Sengar on the pretext of a job, she was further subject to sexual assault, reports The Indian Express.

The girl’s father, who was arrested in a case registered against him on April 3 – for voluntarily causing hurt, intentional insult with intent to provoke breach of the peace and the sections of arms Act.

Four people were arrested on Monday in a cross FIR that was registered by the girl’s family on April 4 in answer to the April 3 FIR against the father. The four arrested have been identified as Vineet, Bauwa, Shailu and Sonu, who all are reported to be the MLA’s supporter. The station officer and four constables of the Makhi police station were suspended on Monday for being biased during the investigation in the case. The whole case has now been transferred to the Lucknow crime branch.

On Sunday, the members of the family attempted suicide outside chief minister’s residence in Lucknow. Police rushed to the situation and both the woman and her family were taken to Gautam Palli Police Station where she again tried to commit suicide. Her father, Pappu Singh (50) was taken to the hospital at night. However, he died during treatment. The officials say that postmortem report of the deceased will help ascertain the cause of death. 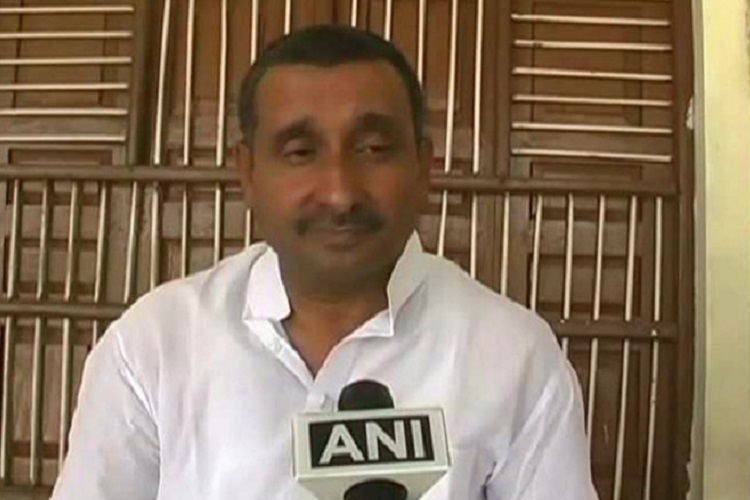 Chief minister Yogi Adityanath on Monday met the survivor’s family and assured that the guilty won’t be spared. A magisterial inquiry has been ordered to probe the lapses on the part of the police. Two police officers and four constables have already been suspended.

Strangely, an FIR was filed was filed against the girl’s father on April 3 for voluntarily causing hurt, intentional insult with intent to provoke breach of the peace and the sections of arms Act for which he was arrested.

However, no action has been taken against the prime accused Kuldeep Singh Sengar.

Meanwhile, Sengar, on the other hand, pleaded innocence and said that he is being targetted by political opponents. “There is no allegation against me, I’m open to any kind of investigation. Strict action should be taken against the real culprits,” he told ANI.