Noted American author James Mason Brown once remarked,”Some television programs are so much chewing gum for the eyes.” He might have said it decades ago, but his statement holds truth in the times we live in. We continue to go gaga over the television shows churned out by the West, but are content with being trapped by the old wine in new bottle kind of content on television. The same-old generational leaps, over-the-top reactions of actors with help of some editing artwork and actors transforming into snakes and flies, are what we are being served on platter by the TV czars.

Recently, there were talks of popular comedy show Sarabhai vs Sarabhai making a comeback on the small screen. What a relief! It will be aired in the form of a web series. Anything will do to escape from the kind of comedy shows that are being aired on television at this moment.

Gone are the days when comedy shows used to be actually funny and could be watched at home with family. Contrary to the present times when humour is bland and consists of repetitive punchlines, these shows during the ’90s and early 2000s are incomparable. Here are 7 shows we wish should return to television again.

Hum Paanch: A story of a middle-class sales representative and his family, Hum Paanch is considered one of the best comedy sitcoms ever in the history of Indian television. The serial revolved around Anand Mathur, his wife Bina, ex-wife who spoke from her photograph and five daughters. His eldest daughter Meenakshi was a feminist, Radhika a geek, Sweety a beauty without brains, Kajal a tomboy and Chhoti a gossip-monger. The lead actors in the soap went on to become popular stars, not to forget Vidya Balan who once played Radhika. Out of all the characters, it was Sweety (Rakhee Tandon) who won hearts with her antics.

Dekh Bhai Dekh: Whenever we think about a family comedy show, this is the one which strikes our mind. An ensemble cast comprising Sushma Seth, Navin Nischol, Farida Jalal, Shekhar Suman and others, the show revolved around the daily problems of Diwan family. The serial produced by Amitabh Bachchan Corporation attained a cult status as one could relate to the characters. 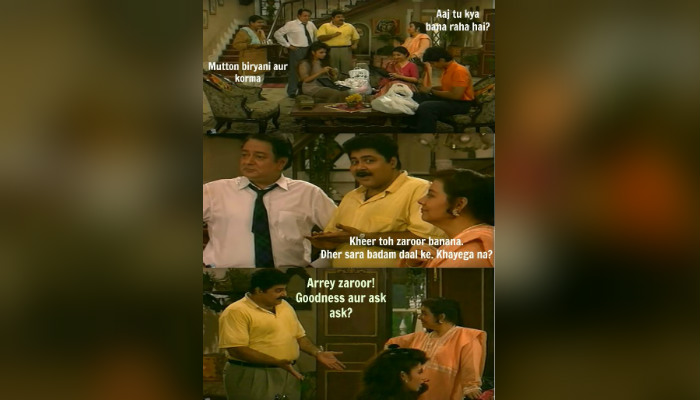 Tu Tu Main Main: Much before Ekta Kapoor assumed the title of TV czarina with the popular saas-bahu serials, Reema Lagoo and her on-screen daughter-in-law Supriya Pilgaonkar had made the genre a popular one. Directed by Supriya’s husband Sachin Pilgaonkar, the soap dealt with the differences between a woman and her daughter-in-law. While the duo fought, we could not stop our laughter. Just have a look at this funny scene and we bet it will leave you in splits.

Zabaan Sambhal Ke: Pankaj Kapur needs no introduction in terms of his exploits on small screen. He played titular role in detective series Karamchand and then gained more respect in satirical daily Office Office. But do you know he also donned the role of a Hindi teacher to students from all corners of India and the world. Zabaan Sambhalke comprised a galaxy of seasoned actors like Shubha Khote, Viju Khote, Bhavana Balsavar, Tom Alter and Javed Jaffrey. 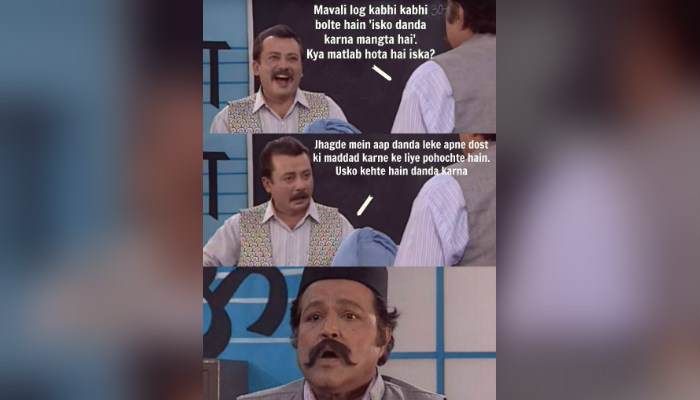 Shrimaan Shrimati: Whether you like it or not, Bhabhiji Ghar Par Hain is a popular comedy show on television. The story revolves around two men who leave no opportunity to flirt with each other’s wives. You might not like some of the jokes, but Shrimaan Shrimati was different. Although it was based on the same theme, but the chemistry between the actors was a treat to watch. After all, it comprised an ensemble cast of Reema Lagoo, Jatin Kanakia, Rakesh Bedi and Archana Puran Singh.

Family No 1: Kanwaljeet Singh is known for his serious roles in films and television. The actor who starred in popular shows like Buniyaad and Saans, tried his hands in comedy too. The story revolved around two single parents who share a house. The soap became popular due to the funny fights between Deepak (Kanwaljeet) and Shalini (Tanvi Azmi) over house space.

Khichdi: The sitcom became a cult and its characters a household name. Revolving around the Parekhs, a Gujarati family, the humour clicked with the audience much due to the chemistry between characters Hansaa (Supriya Pathak) and her husband Praful (Rajeev Mehta). You had patriarch Tulsidas Parekh (Anang Desai) who often derided his son by calling him a gadha (donkey). The series later appeared before the audience as a film in 2010.

Are we missing out on something?