Who knew proposals could make it to the Guinness Book of Records?

An artist from Tokyo,  Yasushi “ Yassan” Takakshi has been creating ‘GPS art’ for the last 10 years. GPS art, in case you were wondering is a digital drawing made using the GPS device (by travelling) along a predetermined route. Looking for unique proposals for his girlfriend, this is what Takakshi decided upon.

The 31-year-old quit his job and travelled for six months covering a route which spelled out ‘MARRY ME’ across the map of Japan. 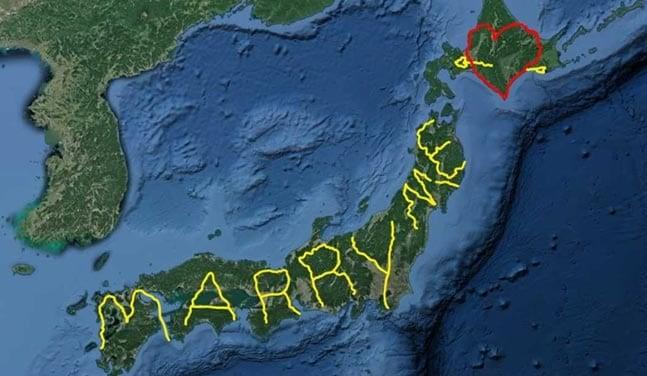 Using Google Earth and a GPS device, Yassan travelled from the island of Hokkaido to Kagoshima covering around 7,o00 kms in six months. Yassan was awarded the Guinness Record for the largest GPS drawing in history.

And yes, his girlfriend did say ‘yes’. “I felt the greatest love in the world,” his girlfriend, Natsuki was quoted as saying by South China Morning Post.

Google tweeted out a video of Yassan on Thursday which is going viral over the social media. It has garnered 24k views since.

For over 10 years, Tokyo resident Yasushi “Yassan” Takahashi has been creating GPS art with @googleearth and #StreetView—but it was his very first drawing that was his biggest, in more ways than one → https://t.co/O9dYPHyauy pic.twitter.com/dEXmwp9suc

And here we thought we’d exhausted all ways of proposing already.