A Non-Resident Indian (NRI) astrophysicist, who has been living in the United States,has alleged that he faced religious discrimination at a Garba event in Atlanta. Karan Jani, a Postdoctoral Research Fellow at Georgia Tech, said that he and his friends were thrown out of Shree Shakti Mandir Center because the organisers felt that their “surnames didn’t appear to be Hindu.”

Jani, who hails from Vadodara in Gujarat took to social media to talk about the incident. In his Facebook post, he wrote how he felt both shocked and embarrassed at what had happened. “Yes this happened in year 2018! In the United States! This is one of the biggest Hindu temple and Garba venue in the US. I have been going here for the last 6 years. Shri Atul Purohit performs here,” he wrote.

He also said how his friends from different communities were humiliated on the basis of their surnames. One of the volunteers also told his Konkani friend, “We don’t come to your events, you are not allowed to ours”.

“Our IDs had Indian Emblem. Yes emblem with “Satyamev Jayate” right? Apparently, it didn’t have our religion. Our caste. While we saw other non-Indians allowed entry (which they of course should! It’s Garba – festival of joy),” he wrote.

It sparked strong reactions among people: 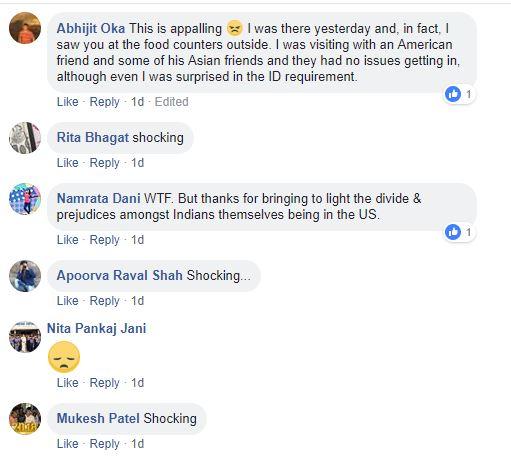 According to a report by The Times of India, Jani later received a call from the authorities who said that the incident was a “miscommunication on the part of the volunteers”. Meanwhile, InUth wrote to Ambaji USA Shree Shakti Mandir but is yet to get their response.