Sarcasm is a brain’s natural defense against less intelligence. And when a fabulous woman like Sunny Leone uses it, you can’t resist but applaud her for that.

So, one of the popular directors in our film industry, Ram Gopal Varma took to Twitter to wish Women’s Day to all. He made sense when he said there should not be just one day to celebrate women. He made sense when he said he is celebrating this day on behalf of all the men. But, he fell flat on his face when he wished all women to give as much happiness to men as Sunny Leone gives. His idea of providing this ‘happiness’ to men reeks of sexism because clearly, his misogynistic mind doesn’t see Sunny beyond her stint in the porn industry. And the fact that she’s a woman first then an actress, never hit his mind. Though, what deserves more attention than the filthy brain that makes RGV writes such posts is how Sunny reacted to the tweet.

Sunny, who always chooses to condemn such sexist posts in a rather dignified way, acknowledged Varma’s tweet. She posted a wink emoticon thanking him and saying ‘ha.’ Her choice of not letting a filmmaker’s post go away just like that shows the kind of strong woman she is. It’s easy to let go of the negativity on social media, and this actress specifically, by the virtue of being Sunny Leone, is subjected to more criticism and sexist remarks than anybody else of her stature in the industry. So, her decision of not ignoring such a remark by a celebrated filmmaker tells a lot. It shows a woman’s attitude of being proud of who she is and her strength of not letting anybody demean the choices she has made in her life. Also, her resistance of using words to explain why RGV’s post about her is strictly unacceptable shows her understanding of the idiom — no use of playing a flute to a buffalo.

This, however, is not for the first time that Sunny has faced such a behaviour from an influential person like RGV. Her presence in the condom ads, the films she acts in, the songs she features in and even the appearances she makes at the public events, everything has been under a brutal scrutiny. The sad part is that even the women contemporaries didn’t let go of any opportunity to pull her down by accusing her of snatching their men from themselves. And how did Sunny choose to retaliate? By posting a picture with her hubby saying that she has her own man, she doesn’t need anybody else’s. By posting her happy picture on social media saying negativity doesn’t bother her and by simply saying ‘I don’t know who Prasoon Joshi is’ when the famous lyricist quoted that he doesn’t want youth to get inspired by Sunny Leone. 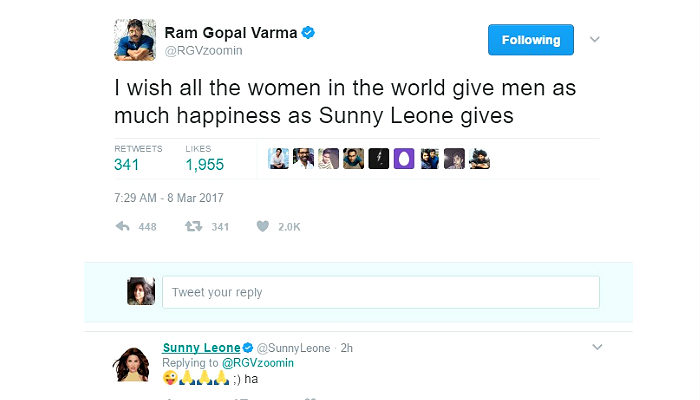 Women all over the world, including the ones in the industry, are fighting for their rights. These are not the rights that make them any stronger than the other gender, but the rights that speak of equality. What is women empowerment or women’s day all about anyways? Is it about rewarding women for being women or telling them how special they are? No. It’s about celebrating the existence of a species which has long been denied the right to equality, right to freedom, right to speak, talk, walk, perform and do everything that encompasses basic human rights. At times, when the industry is changing and making more proud women-oriented films, here we have a man who is, unfortunately, one of the known Hindi filmmakers carrying along grimy ideologies towards women. Look at this new tweet that he has made: 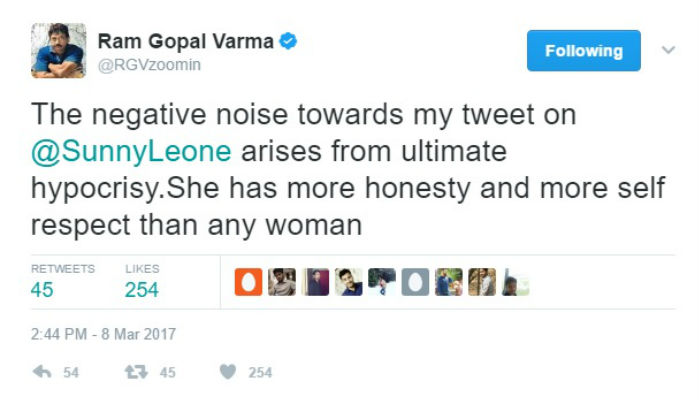 Ram Gopal Varma has a history of sexist and racist comments. Check these videos