As it has been in the history, the film industry has once again felt prey to the extremists’ value of interest. Filmmaker Sanjay Leela Bhansali who was shooting for his upcoming – Padmavati in Jaipur faced the ire of Rajput extremist group Karni Sena.

As per the members of the group which manhandled Bhansali and broke the equipment while threatening him against filmmaking, Padmavati tampers with the facts. They say that Bhansali’s film which features Deepika Padukone, Shahid Kapoor and Ranveer Singh in leading roles, portrays a love angle between Alauddin Khilji and Rani Padmini of Chittor. A few questions for the ‘protectors’ of Rajputana pride:

But, who cares? He’s just a filmmaker. It’s just Bollywood, which has always been vulnerable for people to vent their aggression. If the number of rapes in the nation is increasing, blame it on cinema. If India is not having friendly relations with a neighbouring country, take Bollywood to task. And God forbid if a film dares to comment on a religion or sense of nationalism, just vandalise the theatres and issue threats to the actors featuring in it. Is this the kind of liberal and democratic we have been when it comes to the field of creativity? 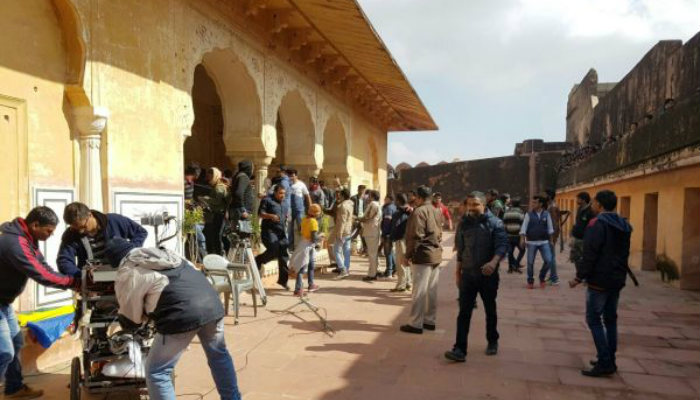 Cinema represents the soft-power of any country. And our films are famous all over the world for being superbly imaginative and larger-than-life. Sanjay Leela Bhansali is a filmmaker whose works of cinema make grandeur alive on screen. His films are not just a celluloid adaptation of a story but a cinematic experience of its kind. His craft speaks of love and shows it in a way which requires great research, huge set-ups and a commitment to offer magnificent work of art. Be it Khamoshi, Hum Dil De Chuke Sanam, Devdas, Black, Guzaarish, Goliyon Ki Raasleela: Ram Leela or Bajirao Mastani, all his films have spoken highly of love. Even when he makes magnum opus set in past, never does he claim that he is presenting the facts as it is. However, he does state that his work will never offend anyone or hurt any sentiments. Not just that, all his films showcase powerful women. Be it Chandramukhi, who finds peace in her profession or Leela who dares to trespass every boundary of family morality, going to the extent of getting her finger chopped for the love of her life. Or Mastani, who shows the courage to travel across states for the man she takes as her husband despite facing ridicule from the society. Just what makes people think that a filmmaker with so much of caliber in the industry would take history for granted?

Moreover, isn’t the filmmaking business a vista of ideas and their free implications? Some historians claim that Rani Padmini of Chittor was a fictional character that was created by story-tellers and poets to establish love and romance in the stories about their state of Rajasthan. So when the character in itself is fictional, how is the objection of tampering with its history justified? Someone created Rani Padmini as per his sense and someone now is adding to that creation with his own sense. How is Sanjay Leela Bhansali at fault?

The entire controversy around halting Padmavati shoot seems more to do with the superimposition of power or authority when you have one. Karni Sena is a caste-based organisation which has a history of indulging in self-styled moral policing, calling themselves protectors of Rajputana interests.
And beating a filmmaker is no big deal for them because their history and morality are above the law of the state. Where is the freedom then? Where is the democracy then? Yes, we are, as community, society, country, have become intolerant and no amount of ugly destruction in the name of culture or values can justify that.

We don’t want one of our own celebrated filmmakers to make a film in his own country and yet we are promoting our land as the most filmmaking-friendly country in the world. Kudos to us!