The BJP’s plan to reach out to the Dalit community by breaking bread at the latter’s home seems to have backfired. One after another, party MLAs are making serious gaffes in the name of “Dalit Outreach”.

On Friday, UP education minister Anupama Jaiswal sparked a row after she described how the state ministers are visiting Dalit homes and braving mosquito bites to ensure they receive benefits of government schemes.

“Schemes are being made for benefit all sections (sic) & to ensure proper implementation Ministers are paying several visits, even if mosquitoes bite them all night,” she told News Agency ANI.

“Most importantly they feel good by the experience. If someone has been assigned two places, he says no, I want to go to four. Thus when there is satisfaction in work, it empowers us. Even I am doing more houses than allotted to me,” Jaiswal added.

#WATCH: Uttar Pradesh Minister Anupma Jaiswal says, ‘Schemes are being made for benefit all sections & to ensure proper implementation Ministers are paying several visits, even if mosquitoes bite them all night.’ pic.twitter.com/EYefMdK9sm

Recently, two more UP ministers have brought major embarrassment to the ruling party that is trying to woo voters of the underprivileged community by sending their MLAs to visit their homes.

Suresh Rana, a minister in the Yogi Adityanath cabinet, dined at a Dalit home in Aligarh on Monday evening but he went with an elaborate catered meal, bottled mineral water and cutlery.

The hosts were baffled, as the visitors have brought their own elaborate meal, which included palak paneer, chhole, dal makhani, pulao, tandoori roti and gulab jamun. 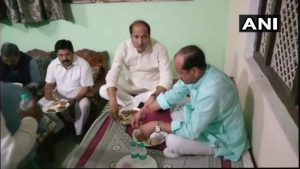 Another minister, Rajendra Pratap Singh, reportedly likened BJP leaders to Lord Rama and reinforced the idea that the politicians were doing everyone a huge favour with their campaign.

“The Ram and Shabari interaction is described in the Ramayana. Today when I came here, when Gyan’s mother served me food, she said she has been blessed serving this food…I am a Kshatriya, it is my duty to protect religion, society,” the minister said after dining at a Dalit home in Jhansi.