Hollywood action star Jackie Chan is nowadays in India to promote his upcoming film Kung Fu Yoga. Upon his arrival in Mumbai, he received a rousing welcome by the Bollywood stars who did not leave a stone unturned to make the evening special for him. The gesture of welcoming guests is imbibed in Indian culture.

Besides Chan, the film also features Sonu Sood and MS Dhoni: The Untold Story actor Disha Patani. Now, it so happened that Sood threw a bash for the Hong Kong actor at a plush hotel in Mumbai, which was attended by several bigwigs. However, it was Chan’s meeting with Salman Khan which generated a lot of buzz. Later, Shilpa Shetty Kundra had her fangirl moment when she touched his feet. Now, that’s her personal choice. Being an individual, she has a right to admire her favourite actor. 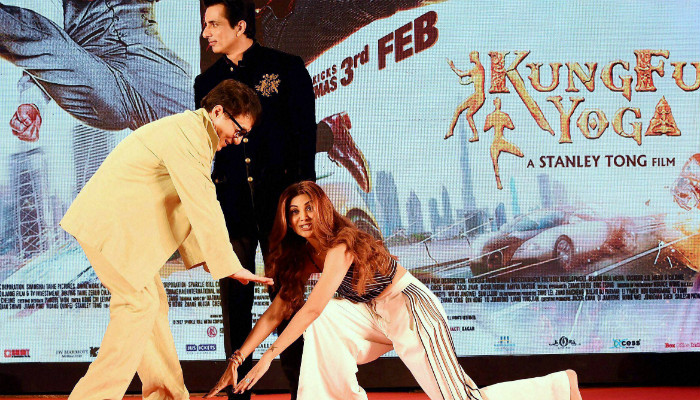 In such a situation, why should we go gaga over Chan meeting Salman Khan? It is just a meeting of two actors from different industries. Isn’t it? If not, are you saying that the Dabangg actor’s stardom was incomplete before he met Jackie Chan. And by the way, Chan had already promised that he would meet him. So, the case is closed. What about actors like Irrfan Khan, Frieda Pinto and other Indian actors who regularly do Hollywood films? I doubt whether the film fraternity and media in the West will accord such a grand welcome to them there.

Hope you guys will stop for a moment and reflect on this observation.
Also read: Photos: Jackie Chan’s India visit looks like all fun. Here are the details