As the Sun was setting on Christmas-eve, security agencies in Kashmir were taken by surprise when massive stone-pelting erupted in the summer capital of Srinagar. Voicing pro-freedom slogans, masked youth appeared in areas like congested Batamaloo and high-security Airport Road, throwing rocks at the police and paramilitary CRPF.

It happened on Saturday when there was actually no call for any roadside protests. However, there was a hartal, as a part of the 2-day strike call given by the “united” Hurriyat, spearheading the ongoing agitation. 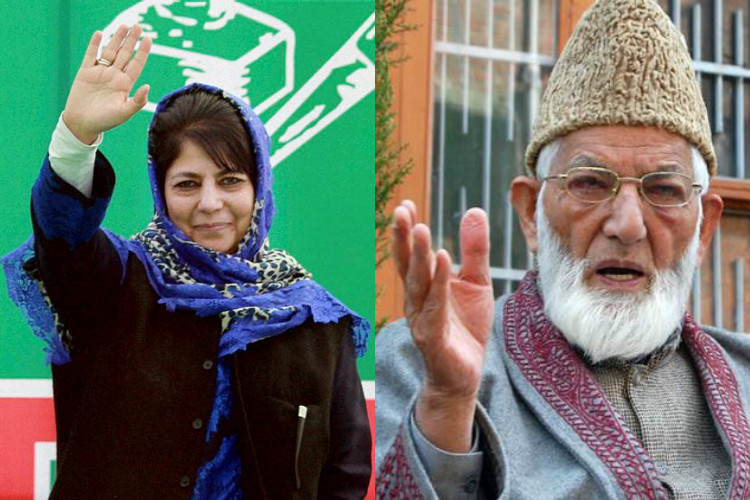 A day prior to this, the Hurriyat had dedicated Friday for “special protests” against the government decision to issue “domicile certificates” to the West Pakistan Refugees (WPR). Terming it a matter of “life and death”, the Hurriyat had called for “state-wide” protests.

In the meantime, his counterpart and Jammu and Kashmir Liberation Front Chairman Muhammad Yasin Malik led a similar protest rally in the city center. Reports of protests also poured in from other districts.

By the same evening Engineer Rashid, the controversial MLA from north Kashmir’s Langate, surfaced outside the residence of Chief Minister Mehbooba Mufti to start his 2-day sit-in against issuance of “domicile certificates” to refugees.

Flanked by supporters, he spent the night in the open, braving the biting cold. But next morning, police swung into action and whisked him away.

On December 26, the so-called President of Pakistan Occupied Kashmir, Sardar Masood Khan joined the chorus. He stated that a move to settle the refugees would “further strengthen the resolve of Kashmiri youth to struggle for their right to self-determination.”

The militant groups, on the other hand, have already asked the separatists to remain united for the cause. A year ago, in January 2015, Hizbul chief Syed Salah Ud Din had said the “move of BJP government to grant citizenship rights to the refugees settled in Jammu is not only treacherous and dangerous but it is also a calculated attempt to change the Muslim demography of the state.”

While the separatists say they are ready to sacrifice lives for the cause, the opposition parties like National Conference (NC) are equally ready to give blood.

Leave aside senior NC leaders like Omar Abdullah and Ali Muhammad Sagar, the young blood in the party has gone a step further. NC leader Tanvir Sadiq says, “NC will protect Article 370 with its blood.” Well, can’t special status to J&K be protected without blood?

While Mehbooba Mufti and her ruling PDP are trying to clear the air pleading that the WPRs are only being issued “identity certificates”, restive Kashmir looks unwilling to buy the pleas.

On December 26, when the CM visited Rohmoo village in south Kashmir to lay the foundation stone of a bridge, she was greeted by a complete shutdown. As soon as she left the area, the youth took to the streets and pelted stones.

Jammu, on the other hand, is witnessing protests in support of the refugees. Amid this new rise of tensions on communal and regional lines in the state, the government is unnerved again.

Exactly when normalcy was round the corner in the wake of softening of the protest calendar by Hurriyat, this new controversy is dragging the state towards yet another agitation. “But we are prepared,” a senior police official told InUth.