Anuj Motla and Sushil Motla, the two main accused in the abduction of a doctor in Delhi, had devised a full proof plan, at least that’s what they believed. The duo had worked with Ola but their driving licenses were suspended by the taxi aggregator a year ago. However, they were aware of the verification process of Ola, so they hatched a conspiracy and arranged all forged documents that were needed to get enrolled.

“Each document, including the bank account cheques and voter ID of the drivers, was forged. They had made such a watertight plan that they had not left any evidence for us to establish their identity,” JCP (eastern range) Ravindra Yadav was quoted as saying.

Waited for the right moment 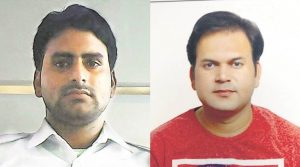 Three days after they submitted fake documents to Ola, they began getting calls from the customers. But they did not want to ply a customer unless he or she was alone. So they used to ask customers whether they were alone or with somebody.

After completing duty at East Delhi’s Metro hospital on July 6, Srikanth Goud went out with two friends for dinner at the Radisson Blu in Kaushambi. After dinner, his friends dropped him at the Preet Vihar Metro station. He went in at 10.55 pm but came out a few minutes later. He then booked an Ola cab to go to his house in South Delhi’s Gautam Nagar, according to Police. At 11:38 pm, Srikanth was picked up by Sushil, the driver of a Wagon R, from near Preet Vihar Metro station.

While en route, the Wagon R was chased and stopped by another car. “They (Sushil’s accomplices) got out of the car and asked Srikanth to keep sitting in the car at gun point. They even thrashed him when he objected.” the police said.

On July 7, the duo used Srikanth’s cell phone to make a ransom call to Ola customer care and claimed they had kidnapped a customer. “When asked the reason, they said it was done for fun. But soon after, the accused called and said he wanted to talk to the senior manager and eventually demanded Rs 5 crore from the company,” Yadav said. The kidnappers knew that since Ola is extremely conscious of its image, it was very likely that the company would pay.

Srikanth was driven to western UP, from where their location kept changing frequently – from Ghaziabad, Bulandshahr, Baghpat, Hapur, Meerut, Bijnor, Muzzafarnagar and Haridwar. During this period, they used Srikanth’s phone to make the ransom calls.

A few days after his kidnapping, his family received a chilling video which showed the 29-year-old chained to a chair, being tortured and begging for water.

Since the kidnapper’s documents with Ola were forged, their information yielded little but the police also dug up the files of the old drivers whose licenses had been suspended or who had quit. Further inspection led the team to Vasundhara in Ghaziabad where they came across information regarding a WagonR car that they drove a year ago.

“The photo of this car, which they had sent to the company, proved crucial. They hadn’t changed the colour of the car but the license plate number was different. What also was the same was a sticker of ‘Tanya Motors’ pasted on the rear end, next to right tail lights,” a report said.

The car was traced to the kidnapper’s village in Dadri, where police quizzed nearly 100 people. Police found that the two had been aided by “Vivek alias Modi, Gaurav Sharma and Pramod Kumar”. Kumar has since been arrested.

As unconvincing as it may seem but the accused Anuj Motla kept updating his Facebook profile throughout the course of this event.

On July 10, the abductors came to know through Srikanth’s identity card, it was his birthday. So they asked what he wanted for his birthday – a cake or alcohol. When he declined, the abductors further decided to gift the 29-year-old a sunglass that served as his blindfold all these days, and that is now a part of police evidence. “The kidnappers gave him food on time. Initially, they kept him in a dark room but they later moved him to some other house,” the police said.

During one search operation, the accused fled in the sugarcane fields leaving behind the vehicle used in the kidnapping. Even though the car was recovered, the victim was missing.

The accused kept moving and changing locations. Police tried to arrest them on Tuesday, but they were dressed as kanwariyas and managed to escape.

On July 19, the police tracked down the abductors in Meerut’s Shatabdi Nagar area where they were planning to move to a new hide out with the victim. A joint team of Delhi Police and UP STF surrounded the house. Following an exchange of fire, the doctor was rescued and the four accused— Pramod Kumar (44), Amit Kumar alias Billu (37), Sohanveer (34) and Nepal alias Goverdhan (44)  were arrested,” police said. During the exchange of fire on July 19, Pramod sustained a bullet wound in his left leg. At least other five accused, including the masterminds, are absconding.