India’s small but significant Jewish community stands out for its own reason. What makes them unique is their ability to mingle themselves into the local culture and still retain their own identity. Currently, there are around 6000 Jews in the country who are busy protecting the last remnants of Jewish heritage that include Jewish cemeteries, schools and some 35-odd synagogues spread across India. Jews practice the religion of Judaism, which has been a part of the Indian history and culture for a long time. Jews entry to India can be traced back over 2000 years as they seamlessly straddled across ancient Maharashtra, Kerala, Andhra Pradesh, Gujarat, Kolkata and Manipur.

Born as Farhat Ezekiel Nadira in a Baghdadi Jewish family, Nadira went on to become a popular Bollywood actress. She is best remembered for her roles as vamp or temptress against the chaste heroines then favoured by Bollywood. She made her debut opposite Dilip Kumar in Aan (1952) with her role as a Rajput princess. She was also noted for her roles in Shree 420, Dil Apna Aur Preet Parai, Hanste Zakhm, Amar Akbar Anthony and Pakeezah. She also won a Filmfare award for Best Supporting Actress in Julie. Also, she was one of the first actresses to own a Rolls Royce. She breathed her last on February 9, 2006.

Esther Victoria Abraham was better known by her stage name Pramila. Born into a Baghdadi Jewish family in Kolkata, she acted in around 30 films and was one of India’s first female film producers. However, history will remember her for being the first to win Miss India pageant. A distinguished alumni of Cambridge Univesrity, she also designed her own film costumes and jewelry. Former Bombay Cheif Minister Morarjee Desai had her arrested on the charges of spying for Pakistan, however, it was later proven that she travelled to Pakistan for promoting her films.

Another character actor, David hailed from Mumbai’s Marathi speaking Bene Israel community. In a career spanning over 40 years, he acted in more than 110 films including popular ones like Gol Maal, Baton Baton Mein and Mere Huzoor. He was also a part of IPTA theatre group and had acted in KA Abbas’s films like the Palme d’Or nominee Pardesi (1957), the National Award-winning film Shehar Aur Sapna. Besides he was also a well-known anchor who hosted prominent award shows. David got one of his best compliments of his life from Jawahar Lal Nehru, who said any event was surely incomplete without David’s speech. He was awarded Padma Shri by Government of India in 1969.

Ezkeil was one of the most eminent English writer, dramatist, critic, broadcaster and social commentator of postcolonial India. Born on December 16, 1924, in Mumbai, he completed his bachelors in English Literature from Wilson College in 1947. Soon, he began teaching and published literary articles. He sailed to London to study philosophy at Birkbeck College in 1948 and returned back three and half years later. His first book featuring was a collection of poems ‘The Bad Day’ which was published in 1952. From 1961 to 1972, he was the head professor of English at Mithibai College, Bombay. Through his poetries, Ezekiel explored love, loneliness, lust, creativity and political pomposity. He was awarded Padma Shree in 1988 and felicitated with Sahitya Academy cultural award in 1983. 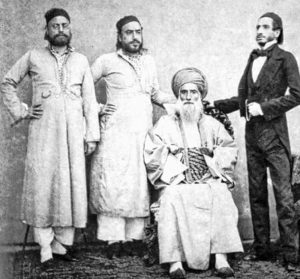 Sassoon with his sons

Businessman Shaikh David Sassoon, who earlier worked as a treasurer to the Pashas in Baghdad, arrived in India in 1828. Soon after his arrival, he started dominating the import-export trade. He began trading with opium and soon expanded his interests to real estate and textiles. Soon, he became the patriarch of one of the most affluent Jewish empires in the world. His business grew by leaps and bounds; it expanded from Bombay to Calcutta to Shanghai, Amsterdam, London and New York. Sasson, not only made a reputation of a fine businessman, he also became famous for his philanthropic work and went on to build several synagogues, hostels, schools and hospitals. The famous Sassoon Hospital of Pune was founded by the Jewish philanthropist himself in 1867. 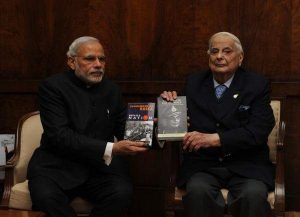 JFR was a Jewish Indian Army officer who was one of the architects of 1971 Bangladesh Liberation War. During the war, he was serving as the Chief of Staff of the Indian Army’s Eastern Command and played a pivotal role in developing the Army’s strategy during the course of operations. In his 36 years of service, he fought in World War II and the Indo-Pak War of 1965. Since Jacob was born and brought up in Kolkata, in his own words, he was Bengali at heart and was very sympathetic to the suffering of Bengalis who were then exploited by the Pakistani army. After his retirement in 1979, he was involved in business activities for nearly two decades. It was in late 90s that he joined Bharatiya Janata Party and was appointed Governor of Goa and later served the Governor of Punjab. He breathed his last on Januaery 13, 2016. 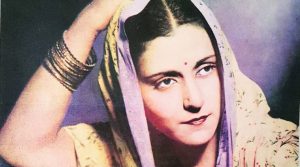 Another film star with Jewish ancestry, Myers was better known as her stage name Sulochna. She chose to become an actor when it was difficult to cast women characters. Myers earlier worked as a telephone operator in Bombay. Producer Mohan Bhavnani discovered Myers and launched her in Veer Bala (1925). Later, she delivered many hits like Cinema ki Rani (1925), Typist Girl (1926), Wildcat of Bombay (1927), Indira B A (1929), Indira M A (1934), Anarkali (1935), Bombai Ki Billi (1936) and so on. Even after the silent era, she continued to do well in talkies films as well. In 1935, when her career graph was at an all-time high, she used to charge a whopping Rs 5000 and drove a fancy Chevrolet car. At that time it was said her earning was more than that of the Governor of Bombay. She was honoured with cinema’s highest honour, Dada Saheb Phalke award in 1973.

Erulkar, a Bene Israel doctor, was often seen on the side of Mahatma Gandhi, attending to his medical needs during his protest against the British occupation. He was the President of Medical Council of India in 1940. He also played a key role in providing visas to European Jews who were trying to flee Nazi occupation during the Second World War. He also helped German-Jewish doctors to get practising licenses so that they could make a living in India.

Unlike other countries, Jews have never faced any kind of persecution throughout the hundreds of years of its presence in India.