Kangana Ranaut is once again out in public to promote her upcoming film, Simran. In her interviews to the media lately, she has been talking at length about her character and director Hansal Mehta. However, what has gauged the limelight more than anything else is her statements on her legal battle with Hrithik Roshan. The actress had been vocal about the case from the very beginning and still shows a distinct courage to answer all the questions directed to her on the issue.

In her latest interview to India TV’s Rajat Sharma, she exploded once again. In fact, she demanded an apology from Hrithik for causing her mental trauma and disturbing her peace. She said:

The personal emails that were leaked are being Googled and people are still enjoying while reading it. I want an apology from Hrithik for his misbehaviour. I have suffered so much of humiliation… it’s incalculable. I wept all night. I couldn’t sleep. The stress, the trauma, mental trauma, emotional trauma… 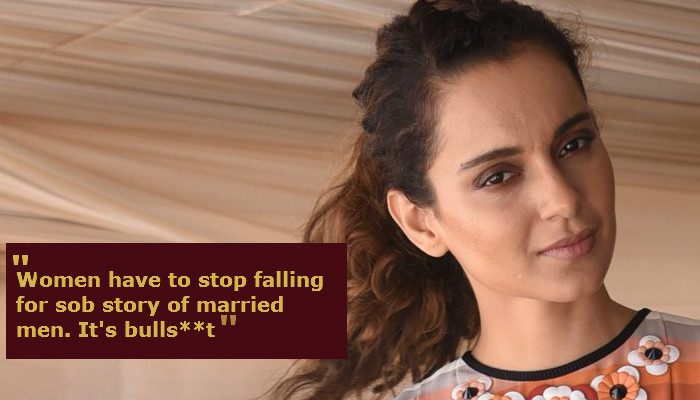 Now when the cat is once again out and the issue has once again been discussed and debated in the public, one expects the man to say something. While Hrithik has maintained a long-running silence on the issue, his ex-wife, Sussanne Khan took to Twitter to post this:

The is no allegation or sad plot that can have the weight to triumph over a good soul. #powerofthetruth #mafamilia #goodoverevil pic.twitter.com/WlVKbIhFjE

In the past too, she had taken to social media to somehow establish that Hrithik is righteous in the matter and he has the backing of his ex-wife. Here are some of the posts she had made in the past: 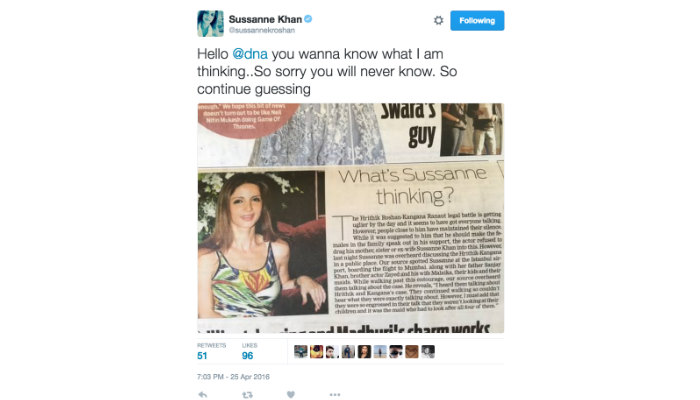 pictures are photoshopped and untrue stories carry 2 much weight.another pic for d rec. I support @iHrithik in this. pic.twitter.com/TGKTc40h0J

Why Hrithik’s silence is an issue now

It was the superstar himself who had slapped the legal notice on Kangana which said:

Since quite sometime you (Kangana) have been insinuating and trying to create an image within the film industry through print and social media and in public at large that there was some relationship between our client (Hrithik) and you. Our client states that it is needless to mention that there was no relationship between him and you. You are trying to propagate a false idea and thereby gain publicity with ulterior motives and malafide intentions.

Also read: Sona Mohapatra writes to Kangana Ranaut on Facebook, asks not to use her fight with Hrithik Roshan to promote Simran

Whatever media has written about since then, is the story of Kangana. Hrithik, for reasons best known to him, never came out and spoke about the issue in length. Even when he was promoting his then upcoming film, Mohenjo Daro, he made sure to comfortably put in the place that he would not like to answer any question on his personal life. During one such promotional interview, when he was asked to put some light on the matter, he said:

I am not here to answer this as it is unethical and unprofessional to say anything on this platform. Be more patient.

On most of the other occasions, his statements were summed up in just a few words. For instance: 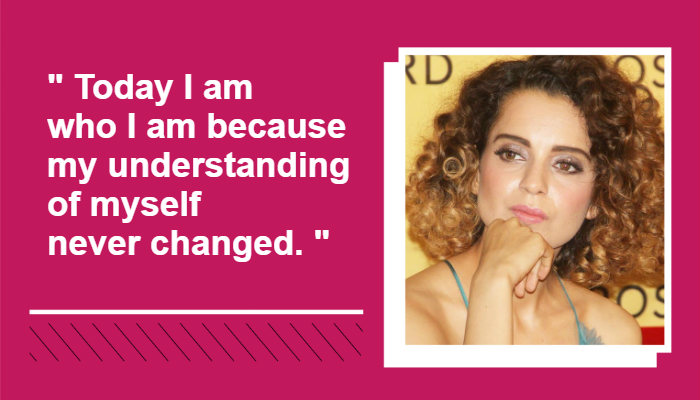 It was also surprising to see that while Hrithik chose to maintain ‘dignity’ by not speaking on the matter, his father Rakesh Roshan opened up on the same. He said:

Hrithik is different. Even when someone [Kangana] was spreading lies about him, he chose to stay calm and dignified. If he does choose to come out with the truth, it will shock everyone.

Shekhar Suman, who had no direct involvement in the matter, in fact, organised an entire press conference and put grave allegations against Kangana. He said:

Adhyayan decided to leave Kangana only after he “stumbled upon some of her intimate messages” which she had sent to Hrithik. 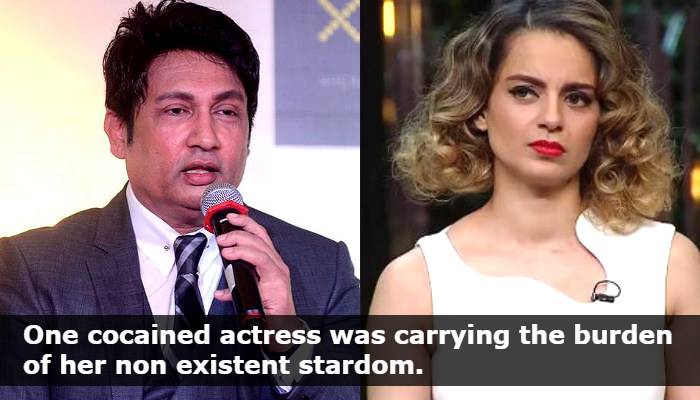 He even said that the actress treated his son like a doormat when they were in a relationship. He explained:

Kangana took Adhyayan to Filmfare awards, but Adhyayan was falling back 15 feets from Kangana as though he was some bodyguard to her. She was giving interviews and he was standing behind her. I felt so horrible for my son, I must have died thousand deaths. She didn’t even look at him. Eventually, when she went on stage she thanked every one except Adhyayan.

Even Adhyayan himself got involved in the mud slinging. While narrating his side of the story, he said:

One day, Kangana called me at home in the night to do some puja. I reached at 11.30 pm as the puja was to start at 12. She had a small guest room in her apartment and she had covered it in black, including black curtains. There were some random statues of God, fire all around, some scary things (kept) puja. She asked me to chant some mantras, and locked me in. I was terrified. I didn’t do it and I came out and told her that I had. Then she started taking me to Pallavi frequently. One day, Pallavi said go to the graveyard at 12 am and throw these certain things. I was chilled to the bone! I didn’t go. 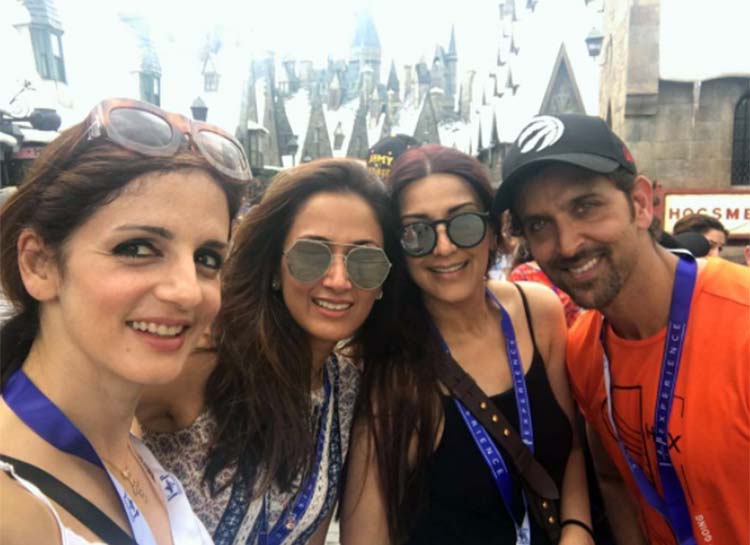 Now, it should be noted how everybody else took out time to contribute to the issue, except Hrithik himself — the man of maximum importance. But, why has he chosen not to speak? How long are we supposed to buy his argument that he’s maintaining ‘dignity’ by not speaking in the matter? Also, what ‘dignity’ is he talking about now when he has been accused with every possible allegation reported nationally? Isn’t it high time we deserve to know his side of the story? Isn’t it high time he should come out in the open to talk about what’s already ruining his image entirely among his fans?

What has Kangana achieved by being immensely vocal about the issue is transparency among both her and Hrithik’s fans. If not anything else, the case has strengthened her and presented her as a woman of substance who will fear nobody if it comes to demeaning her. She is now the epitome of women empowerment and is a go-to name when it comes to anything related to ‘feminism’ in Bollywood. While the result of the case seems far from being delivered anytime soon, it should be credited to Kangana for knowing the art of ‘speaking right at the right time.’ 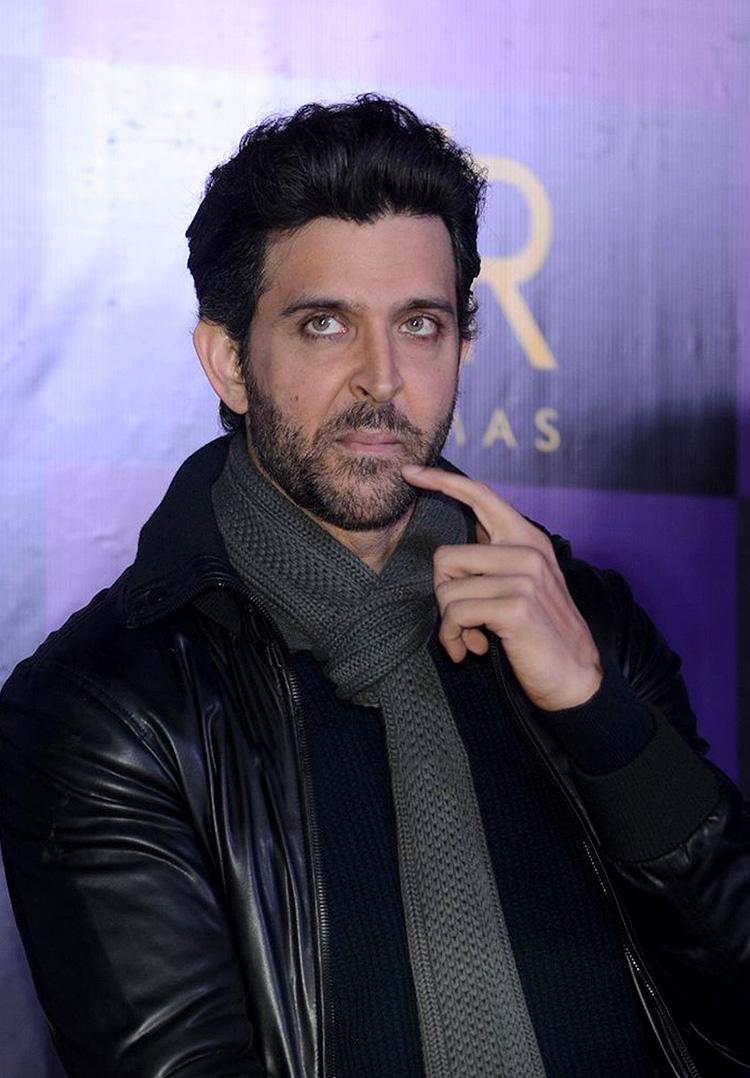 As for Hrithik, he is one of the most idolised superstars in the industry. One of the many actors who rose to stardom overnight with his first film itself. It is Hrithik who is appreciated for making the kids of 90s take up dance or work out. It is him who stole the hearts of many young women out there. Now seeing him not letting out his side of the story is not just only heartbreaking but also foolish on his part. What is stopping him to explain why he is not at fault? Or even if he is, won’t he set a right example by simply accepting that he did commit a mistake (like all humans do) and has moved on?

What is more annoying is to see Sussanne reacting on every issue like his spokesperson.

Time to grow up and learn to take a stand maybe!

Also read: Kangana Ranaut’s advice to women approached by married men for relationship is bang on