After protesting nearly for a week outside the headquarters of Staff Selection Commission in New Delhi, hundreds of protesting SSC job aspirants heaved a sigh of relief on Monday.

The moment of relief came after the Union Home Minister Rajnath Singh on Monday announced that CBI will start an inquiry into the allegations of malpractices in the recently held Combined Graduate Level exam. However, the students said government has accepted only one among their many demands and that a lot more steps were needed to bring accountability and transparency in the SSC.

ALSO READ: Why Hundreds Of Youngsters In Delhi Won’t Celebrate Holi This Year

“We have accepted the demands of the protesting candidates and ordered a CBI inquiry. The protest should stop now,” Singh was quoted saying by PTI.

“Ordering CBI inquiry into the scam is a welcome step but this will not solve the larger problem,” Shubhansu Bhadauria, an SSC aspirant, told InUth. “We had devised a proper charter of demands for the government to act upon in order to ensure that no malpractices and irregularities are repeated in the examinations. But there’s no word on them from the government.” 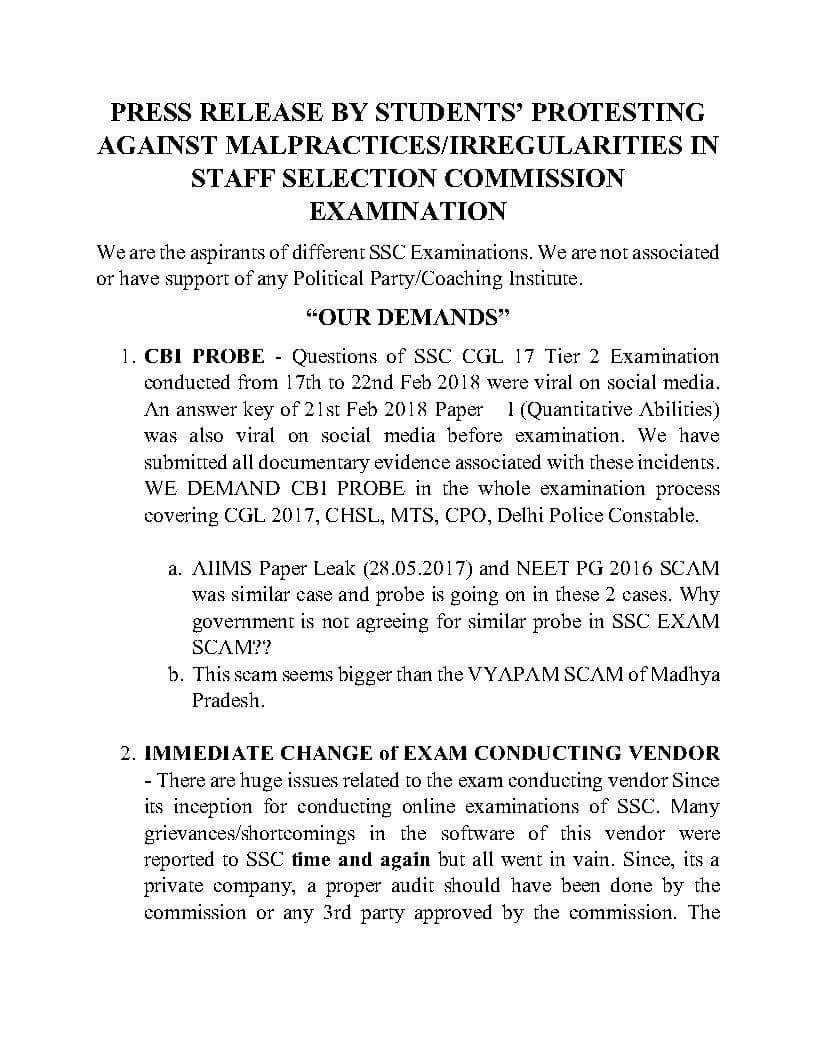 According to the charter of demands prepared by SSC aspirants, the students want SSC to get rid of its current private vendors through which it conducts the online examinations. The other demand is to set up a proper and immediate grievance redressal mechanism for students. There’s also a demand for SSC to recognize a nominated student body to accommodate inputs from the students in its conduct of examinations.

The protests, which started last week gained momentum after a string of opposition and youth leaders joined protesting students over the weekend. Hundreds of protesting aspirants had decided to not celebrate Holi this year as a mark of protest.

SSC, which recruits government employees in various central government ministries and departments, is not new to controversies. In the past, the commission has been accused of irregularities and corruption.

“We want accountability and transparency in the system. There’s no guarantee that this won’t be repeated again,” Bhadauria added.