The importance of theatre lies in its existence, its meaning, and the unraveling of layers – of perspective, dimensions and new horizons. It presents to us, in an hour or two, a whole new world where you as the audience are as much the character as the actor himself living various emotions and values. Art presents itself to us – so that we can learn but most importantly unlearn. Unlearn what has been taught to us over the years and to question different school of thoughts and to create new. It evokes passion, restlessness, and always presses a different string in the rhythm of your being. 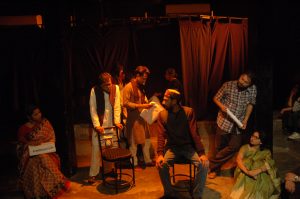 The play Kahani Ki Kahani Ismat Ki Zubaani did exactly that. It introduced  to you Ismat Chughtai – bold, controversial and true to her soul woman, who spellbinds you in her journey of creating the genius of Ismat Chughtai – of the stories that influenced her, of penning down the sheer nakedness of society, the cruel nature of partition and of her friendship with true blue genius Saadat Hasan Manto. Ismat, who was a feminist in times where patriarchy was so prevalent, revolutionized the aestheticism of the 20th century Urdu literature. 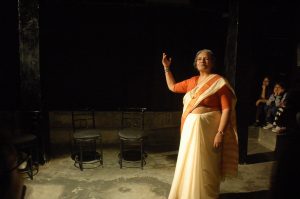 The play opens with the homecoming of Ismat and gradually shifts to her donning the role of narrator, swaying each of us through her journey of untold stories – of partition, turbulent friendship, patriarchy and her indomitable soul. The play unfolds as the young Ismat slowly explores many important aspects of her being reflected through her work. Through Lihaaf she explores the subject of homosexuality and gender; the concept of fatherhood is scrutinized in Do Haanth; Bichhu Phupi recalls that importance of relationships and misinterpreted souls; finally through Dozaqi, Ismat reflects upon the idea of the power of individuals in turning an individual’s world upside down.

Not only we see Ismat the writer, the woman in Ismat often presents itself to us, brave in knowing her worth and questioning standards, righteous in rejecting her dear friend Manto’s offer to come to Pakistan, strong headed to know what she ought to do even in the midst of the biggest genocide that the sub-continent has perhaps ever witnessed- Partition. 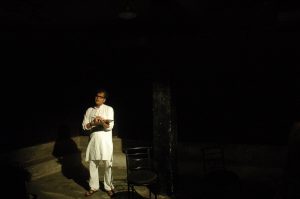 The beauty of the play was not only the story, but its capability to take you places and make you feel what it is like to be in Manto’s Bombay or the chilly winters in Lahore. The script is beautifully written by Noor Zaheer, who plays a matured Ismat and has also directed the play.

The play is intermingled with the artsy environment of Safdar Studio with near perfect lights and a welcoming audience. The aesthetics of the studio, which is crowd funded, is beautiful and quaint and the small amphitheatre space adds to the charm of this tale.

The cast was hands down the best. Noor Zaheer, as Senior Ismat Chughtai, was effortless. Varsha, as young Ismat Chughtai, was just as wonderful, and Rajneesh, with his uncanny resemblance of Manto through his hairstyle, was a delight to watch. He did justice to Manto by playing the genius in his rawest form and was very apt. Deepti as Bichchuu Phupi was hilarious and Afsara as Laajo was admirable. Overall; the play is just another reminder of why some tales need to be told. And retold.