Bob Dylan is one musician whose popularity cuts across borders. The legendary musician was awarded Nobel Prize for Literature for “having created new poetic expressions within the great American song tradition.” In a career spanning around six decades, Dylan mesmerised millions of fans across the world with his albums like ‘Blowin’ in the wind’, ‘Mr. Tambourine man’ and ‘The times they are a-changin’.

There is no denying his accomplishment as a recording artist and performer but song writing is considered Dylan’s greatest contribution to music. Born on May 24, 1941 in Duluth Minnesota, the musician’s original name was Robert Allen Zimmerman, it was in 1962 he changed his name to Bob Dylan. His lyrics were unique given the kind of attention it drew for its various political, social, philosophical, and literary influences.

With his deep husky voice and distinctive proses, Dylan broke the conventions of then existing pop music and appealed to the burgeoning counter-culture.

Despite his huge fan base in India, Dylan never visited the country except for once. The maverick had come to Kolkata in 1990 to attend the wedding of son of folk singer and musician Purna Das Baul, NDTV reported. This is the only time America’s Baul, as Bob Dylan once called himself, had come to India.

Reminiscing Dylan’s visit, folk singer Dibyendu Das said he was overwhelmed to have Bob Dylan come to his wedding. “You can’t describe Bob Dylan in one sentence. He is a great man. He is true artist. I don’t want to talk about his visit to Kolkata as he came here as a friend,” he told the News channel.

Dylan’s ex-manager, Albert Grosman had invited the folk singer from Bengal to the US to perform at a music festival in San Francisco where Dylon and Das became friends.

Das also remembered how Dylan sent a sack of rice to his place after he came to know the folk singer’s family only eat rice. Dylan often ate the ‘khichdi’ cooked by Manju Das Baul, also a singer and Mr Das’s wife. 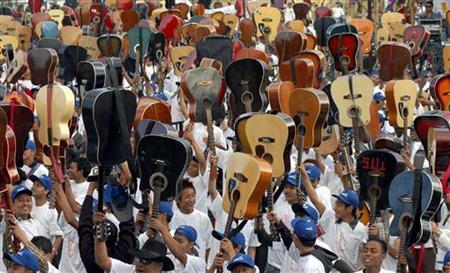 Shillong, which has earned a moniker of India’s rock capital thanks to its various music festivals and local bands like Soulmate, hosts an informal celebratory concert every year on 24 May, Dylan’s birthday.

The celebration which began as a small meeting of friends on legendary musician’s birthday 35 years ago(1972) by local celeb and a big Dylan fan Lou Majaw turned into a major event in the regional music calendar. The event now attracts musicians and fans from all over India to the Meghalaya capital.