Dusshera weekend meant only one thing for me, an opportunity to escape to the majestic hills and indulge in some adrenaline rush. I buckled up in the passenger seat of my friend’s Wagon-R and we began to roll out of the depressing streets of the city, dreaming of an adventure. Our destination was Bir Billing, Asia’s highest and the world’s second highest paragliding spot. And I couldn’t wait to jump from the height of 8,000 feet above sea level.

What: Paragliding in Bir Billing

How much does it cost?

Things to do in Bir:

Bir or Beedh is a small village in Himachal Pradesh, about 10 hours away from the hustle bustle of the national capital. For anyone who loves a quaint little retreat sans the happening life of a commercial hill station like Manali or Shimla, then Bir should be your number one priority. 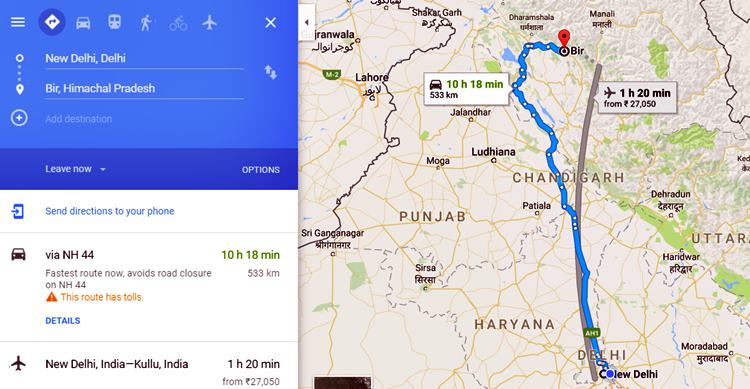 The drive that should have just been 10 hours, actually lasted a full 13, all thanks to the wonderful choked up roads leading to NH-1. I couldn’t blame them, if I was Delhi, I would want to leave me every chance I got to.

I stayed at the Bir Resort which is surrounded by tiny tea gardens at the foothills of the Dhauladhar Range. In the evening, I went up to the terrace to see the clear sky full of stars, something that I terribly missed in the city. As I watched the evening sky full of paragliders, all I could think of was the moment when I would be one among them.

That evening I took a stroll with my friends up to the landing spot, which was barely 1.5 kms away from the resort I was staying at. The gliders seemed in a precarious position, swaying with the wind and unable to have any control whatsoever. One moment they were gliding peacefully and the next moment they were rushing towards the ground with such velocity that I swear I could hear the parachute flapping in protest. It was only later that I would learn that this was not the case, and the pilots were always in control of the situation. 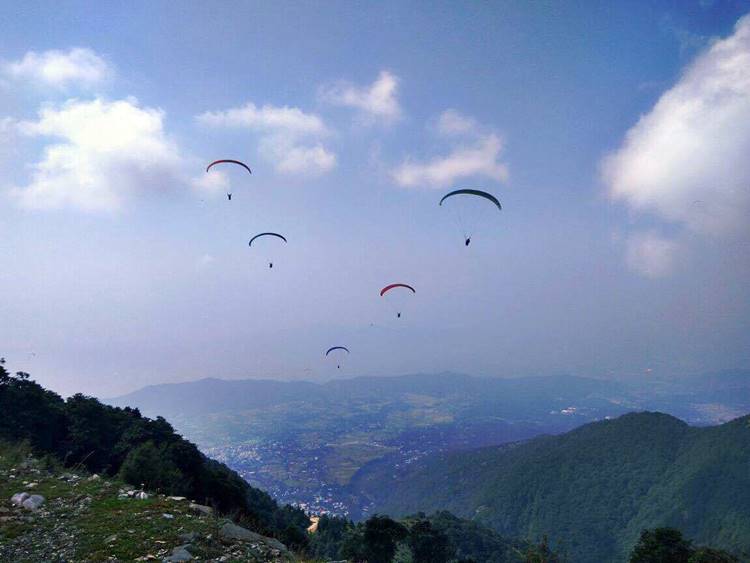 The actual activity happens from Billing, which is roughly 14 kms further from Upper Bir. Because of the undulating land and the narrow road winding up to the spot, it is advisable to travel in the shared Sumo with the pilots instead of boasting about your driving skills and attempting a scary drive up the hill.

Two larger groups headed out before us. Since we were only 4 people, we were asked to wait until the next round of pilots headed upwards. Friendly advice, try and travel in larger groups of 8 or 10 people, chances are you will be served first even if you are late.

Instead of waiting around, moping in despair, I decided to explore the town and dragged my grumpy friends. We backtracked to Baijnath and visited the famous Shiva Temple. 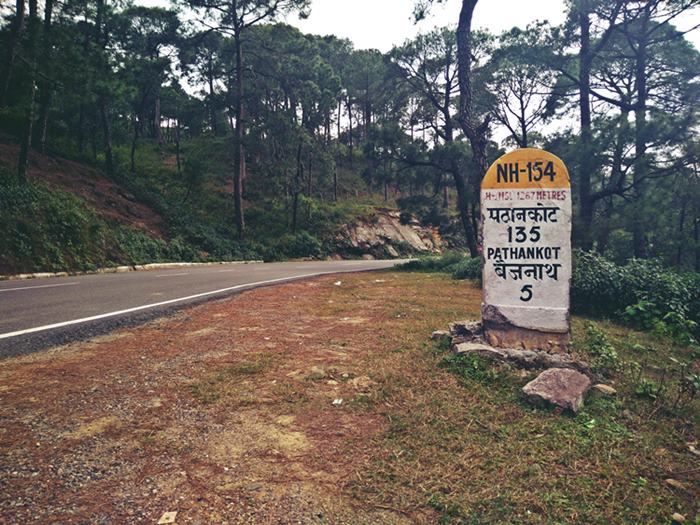 Baijnath is actually famous for its 13th-century temple which is dedicated to Lord Shiva as Vaidyanath, ‘the Lord of physicians’. 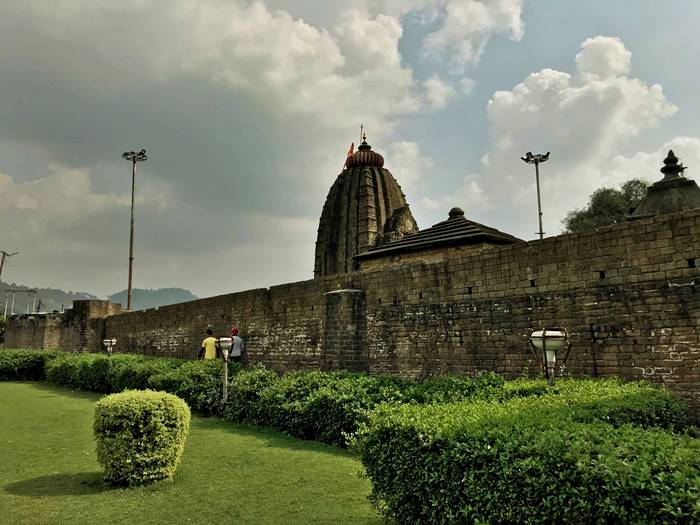 Behind the temple, we discovered a small picnic spot by the riverside known as Kheerganga Ghat, situated on the banks of River Binwa. 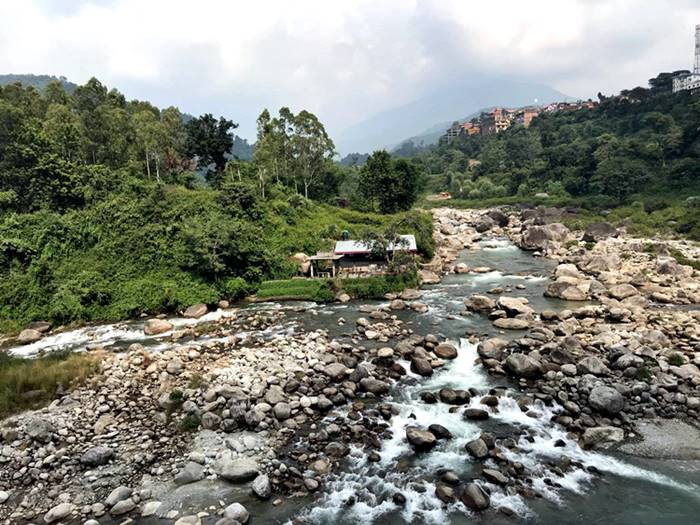 The water was chilly and clear. I could have sat there on the rocks, all day, soaking in the sun, listening to the rhythm of the gushing water. 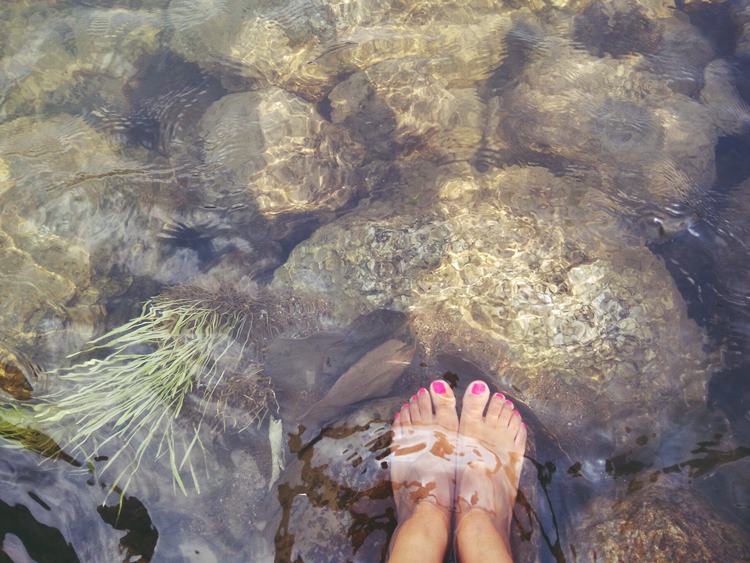 There is a sizeable Tibetan community of Tibetan refugees in the village, especially at the Bir Tibetan Colony. On our way back into Bir, we went to two Tibetan Monasteries – Chokling Gompa and The Deer Park Institute. Established in March 2006, the institute is a ‘centre for the study of classical Indian wisdom traditions’ under the patronage of the Dalai Lama. 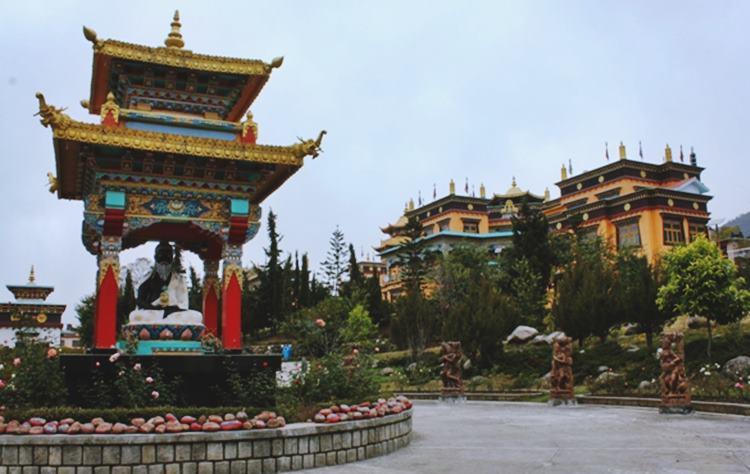 That evening we were invited to the opening of Musafir Café, situated in one corner of the valley. We followed our phone’s torch lights on a moonlit deserted road until we heard music flooding out of the trees. Any given day, I would prefer small town cafes over pubs or noisy restaurants. That night as I sang along old Bollywood songs with my half-eaten lyrics, I was sure my dream of paragliding would not be fulfilled on this trip.

Next morning a loud rap on the door woke us up urgently. Someone’s pre-booked slot had been cancelled, and we were up next. Quickly we gathered our belongings. (It is advisable that you leave precious items like phones and jewellery behind. Nothing will happen to it and the pilot usually offers to safeguard it for the duration of the flight, but it is always better to be on the safe side.)

(It is advisable that you leave precious items like phones and jewellery behind. The pilot usually offers to safeguard it for the duration of the flight, but it is always better to be on the safe side.)

The topsy-turvy ride up the hill would make anyone wretch (and it did have one of our friends throw up) but fortunately, my pahadi genes could stomach the joy ride. 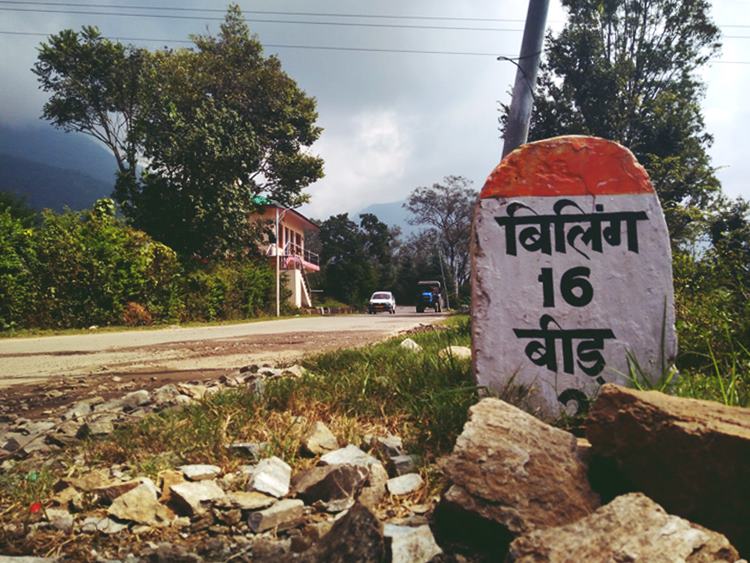 Once we were up, there were two basic instructions: You observe and then you run. The pilot buckled me up in the harness. Praveen, one of the only 80 licensed pilots who was allowed to fly in Bir looked at me with his head tilted to one side. Now I am 160 cms tall and weigh 49 kgs, underweight for a regular 24-year-old. So when the pilot saw me he went “Aapko bhagna hoga, aap bhaag nahi paoge par koshish kar lena” which basically meant “Tumse na ho paaega!” He said you see how they are alighting and when the wind is right I will ask you to run. I was quite apprehensive. That’s it? No safety manual? And did I forget to mention I was standing at 8,000 feet? I gulped. Okay, we can do this!

Before I knew it the pilot was like “Go!” My first reaction was: “Abhi?” I am not even ready but he was pushing and nudging me until I got the hint. I tried, but I couldn’t pull the weight of my body, with the harness, the pilot and the parachute against the wind. And so the pilot just sort of pushed me until we were off the cliff, that’s right no more land under the feet. 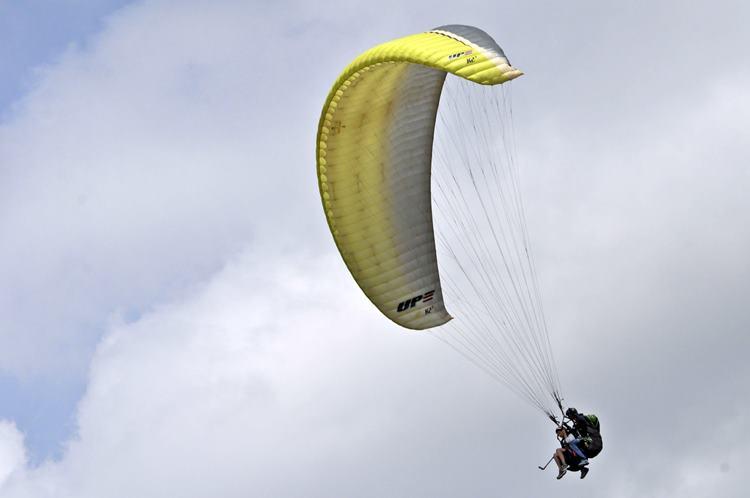 I screamed, you would too and then it was all okay. Because the view is so damn breath-taking that you would rather not ruin it by being afraid.

Helpful tip: Those who have vertigo or are nervous about the height, don’t immediately look down in the valley, let your eyes adjust to the immediate scenery. Then slowly take your gaze from your eye level to the centre of the gorge below. 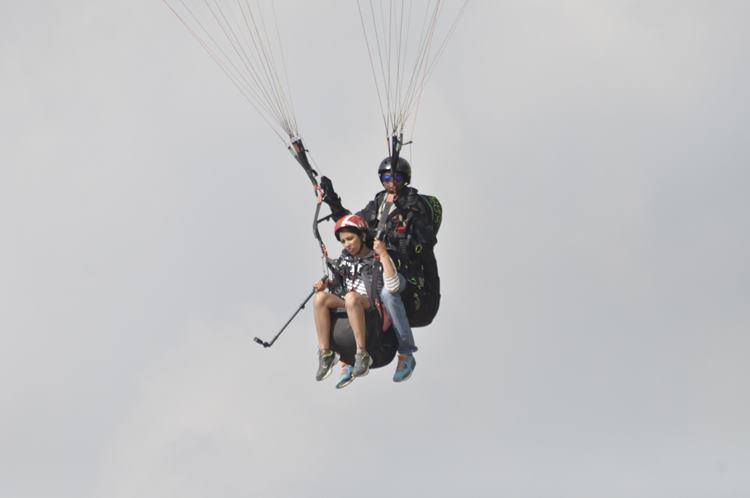 I felt like I was sailing in the air. Imagine an aeroplane seat without the aircraft body frame around you, it was that comfortable. With the air whooshing in my ear, I took in the view before me. It was as if the colors were suddenly brighter from this height. The tiny hills full of deciduous trees, the terrace farming on the slopes of the smaller peaks and the winding stream meandering through the village, it was one hell of a view. 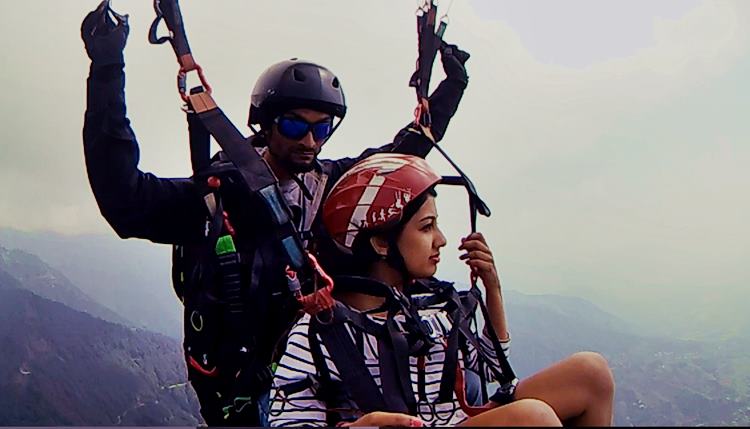 The entire flight takes about 20-25 minutes. As you get closer to the ground, you realise just how far you have come. Landing is simple, the pilots are quite experienced and they generally make an effort to make sure you do not injure yourself. All you have to do is manage your body weight and lean slightly forwards until your feet touches the ground. Oh the sweet feeling of standing on solid ground! 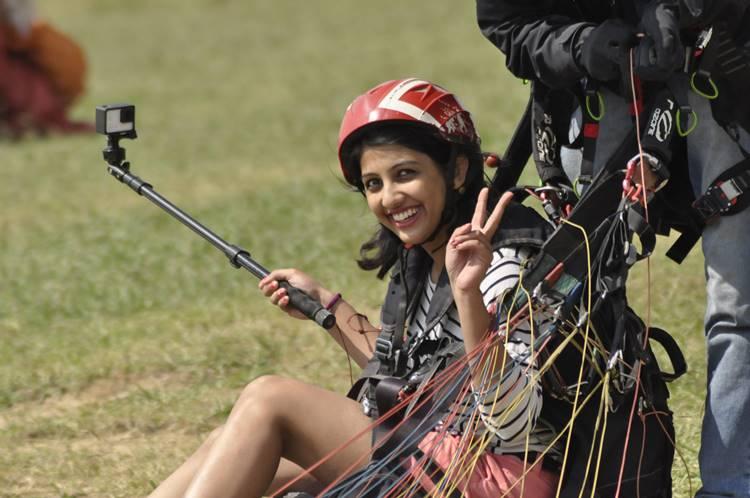 And just like that, as soon as it had started it came to an end. But you can’t miss this for the world, take it from a bird.

Also Read: 11 things I was not prepared for before moving to Delhi from a hill station