There are at least eight women in my immediate circle who have PCOS. And each one of us suffers differently. I often don’t bleed for months, one suffers from cystic adult acne, and another one often bleeds for over 60 days at a stretch.

One thing we all have in common, though? Due to a surge of testosterone in our bodies, thanks to PCOS, we have an abundance of hair everywhere, except on our heads and male pattern baldness approaches us slowly, but none of us found that out from our doctors. Not the first ones we went to anyway.

According to some studies, one out of four Indian women suffer from PCOD (Polycystic Ovarian Disease), but PCOS (Polycystic Ovarian Syndrome), which is an advanced form of PCOD, affects about 10 per cent of women in reproductive age groups. And yet it would be safe to say most women learn more about living with PCOS by doing their own research than through the doctors.

The first diagnosis for 27-year-old Apeksha Priyadarshini, a Delhi-based PhD scholar, was horrifying, “The first time I went to a gynaecologist with unusually heavy bleeding, I was told I’d had a miscarriage. This was without any scan or x-ray.”

“Some medical technicians even refused to do a trans vaginal scan to diagnose what was happening to me, because I was unmarried. They think that if women are unmarried (read: virgins), then the scan will damage the hymen,” Priyadarshini said, adding,”Most gynaecologists prescribe diabetic medicines and contraceptives to deal with PCOS, without educating patients about the syndrome, the side effects and dependency of these pills.”

I’ve met several doctors who would stealthily try to figure out if I am sexually active, before I was diagnosed with PCOS at the age of 22. Being prescribed diabetic or contraceptive pills that only helped in so far as regulating my cycle was concerned, without helping to deal with PCOS, meant a lot of sick days. Despite asking and talking about it, I was offered no alternatives.

Somehow the slew of doctors I had visited, failed to mention how PCOS could affect my physical as well as mental health. What I was told however, were my high chances of getting diabetes, and low chances of having children. Having PCOS doesn’t necessarily mean you are infertile, but it does make it difficult to conceive… another thing I learnt through my own research.

The first time I missed my periods, it was for four months straight. I remember worrying incessantly about mysteriously being pregnant, and it not showing up on any of the home pregnancy kits I bought. When I finally started bleeding again, I was overjoyed, almost euphoric. Though the pain that came with it was excruciating, like the combined force of every single period I had missed. But it was still a sign that my system was still putting up a fight.

Immunology student Shrabanti*, 30, who grew up in Kolkata and now studies abroad, says, “The first doctor I saw told me my sudden weight gain, cystic acne and delayed periods were nothing to worry about. I was an active 21-year-old who had never had acne before, not even during puberty. It wasn’t till the third doctor, who suggested I get an ultrasound and blood tests done, that I was finally diagnosed with PCOS, thanks to which I get extremely painful periods.”

PCOS can bring with it days when it feels like someone is repeatedly punching you from the inside, convincing your bowels to constantly send you mixed signals, and compelling your knees to give way completely whenever you try to stand up, among others. Your body may bloat, and it can make you crave everything that’s specifically designed to escalate the overall discomfort. Bonus: it wrecks havoc on your mood, even during the months you don’t menstruate.

Speaking of unpleasant things, women with PCOS are more likely to face casual body shaming on a regular basis. Be it from doctors or ‘well meaning’ friends. Having PCOS leads to weight gain, which is in turn, very difficult to lose. But strangely, ‘lose weight’ is often the only advice I get from doctors. In case you’re wondering why this is strange, I have friends who have PCOS, and the only tell-tale signs are the small amounts of weight around their abdominal regions, which according to their doctors, will go away once their PCOS does. Do you see the irony? 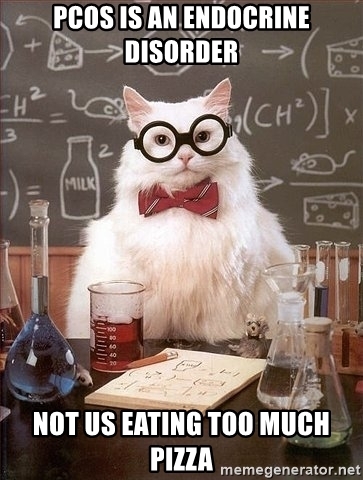 It is possible that my PCOS is a byproduct of my past lifestyle choices. Growing up in a dysfunctional family meant I often found comfort in food and hid from the world, nursing my fluctuating mood and depression. But I have been working on mending my ways.

I have ditched the pills that were doing me no good and gone the homeopathy and ayurvedic way. And it seems to be helping as long as I’m consistent with my treatment. Sometimes my periods come on time. Sometimes they go away for tropical vacations for months. But whenever it does show up, I embrace it with joy.

This is a personal essay. The writer is not a medical practitioner and does not recommend stopping/interrupting treatment without a doctor’s approval in any way.