The word fitness is synonymous to Tiger Shroff. The Baaghi star is one of the fittest actors in the B-Town. Unlike his contemporaries, he does not pay much attention to weight training. An avid learner, Tiger Shroff relies heavily on gymnastics, kick -boxing and mixed martial arts. Every now and then, the actor shares a couple of videos on his social media account wherein he can be seen performing some death-defying action scenes and stunts.

Now, we all know it is not an easy task to attain a nice sculpted body. The lean and mean frame which people aspire for is a result of sheer hard work and determination. The actor puts in a lot of effort to attain a chiselled body. A look at his videos and his fans can easily figure out that the flexibility level of the actor is fantastic. He can jump, turn and kick like a pro! 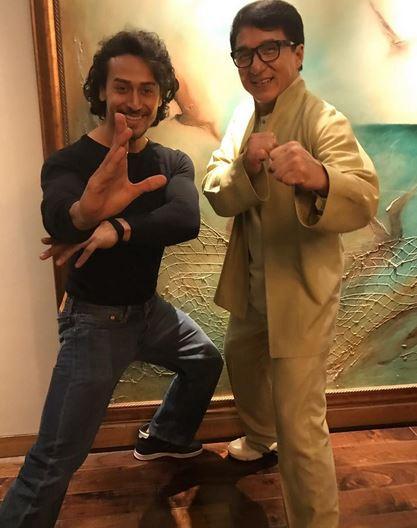 Having said that, he also loves to workout in the gym. The actor follows a strict fitness regime. Be it the resistance cable workout or lifting heavy weights, Tiger Shroff surely knows how to impress the fitness enthusiasts. One should never forget that diet is another important prerequisite to getting a fantastic ripped body. His diet plan is a result of strict discipline. Check out some of his stunts and fitness videos:

My kind of playground! Some basic drills to get more explosive on your legs! #motivatedmondays #earlymorntrainingsessions

Trying to build a new suit __

We all know how Tiger Shroff is giving his Bollywood contemporaries a run for the money. Recently, the actor did a sporty photoshoot for a very popular magazine.  Here are a couple of photos from the same:

Kung Fu’ing his way on to our May Cover, Tiger Shroff (and his killer abs) say a fiery hi at ya. Plus we’ve got the low down on this IPL’s high points, a killer summer style guide and more. Issue out on stands tomorrow. ___________________________ Photographed by: Tarun Vishwa Styled by: @vijendra.bhardwaj Assistant stylist: @tanster24 Makeup: Rahul Kothavale Production: @magzmehta Fashion Assistant: @dez_fdz Location: @jamanafaru_maldives . . . . #GQCoverStar #TigerShroff #LookGood #Summer

#Repost @tigerianabhishek with @repostapp ___ READ THE NEWS BELOW ____________ There’s a move in kung fu called ‘The Tiger’. A direct, aggressive attack that’s believed to be one of the most effective martial arts plays. But this isn’t the method that the most gentle member of the Shroff clan would choose in a fight. In fact, he’d rather not fight at all, except for his family’s respect. After three films and a cultish fan following, he’s still coming to terms with his name – and the destiny that’s been chosen for him. Shroff has the unlikeliest personality for a young star. He’s painfully reticent, socially awkward and prefers not to speak to most people, let alone perform in front of them. “You have to act like a star, combat the anxiety that you might make a fool of yourself. Plus, they look at me as Jackie Shroff’s son, and it’s a lot of pressure.” He continues, “I don’t think one always grows into one’s name. I don’t feel like a Tiger most of the time. Like right now, talking to you, or going about my day, I feel more like a tame house cat. But when dancing or giving an action shot, I channel the meaning of my name.” Shroff never intended to be in front of the camera. And the journey from bashful, college dropout to actor was an arduous one for him. The physical asks of him are also considerable. Along with daily doses of high-intensity workouts that are a mix of strength, cardiovascular and flexibility training, he’s on a diet that allows him to consume no more than 2,000 calories a day. “I’m on what you call a caveman’s diet. I stay away from all man-made items like rice and grains, and all forms of sugar. It’s mostly fruits, vegetables and animal protein.” #tigershroff #munnamichael #Baaghi2 #soty2 #baahubali2 #bollywood #kritisanon #aliabhatt #shradhhakapoor #salmankhan #hollywood #tubelight #sushantsinghrajput #sunnyleone #magazine

Clearly, Tiger Shroff is setting some strong fitness goals to all the fans out there!

On the work front, the actor will be seen next in a dance-based film Munna Michael and after that, he will return with Baaghi 2. Directed by Sabbir Khan and produced by Sajid Nadiadwala, the movie will release next year.
For interesting entertainment and lifestyle videos from InUth, follow us on Youtube.com/InUthdotcom