Parineeti Chopra is grabbing all the limelight for her upcoming film Meri Pyaari Bindu. The trailer of the film has already generated curiosity among the fans as it showcases some wacky chemistry between her and Ayushmann Khurrana. On top of that, the actress has done a super entertaining photoshoot for a very popular magazine in India. Pari recently revealed some of the pictures from her photoshoot and by the looks of it, the pics speak volumes.

After making a smashing debut in Ishaqzaade, Parineeti’s career has been a roller-coaster ride. However, when it comes to her photoshoots, each and every cover shot was loved by the audience for some reason or the other. Almost a year ago, Parineeti surprised everyone by shedding some weight and her photoshoot showcased the unbelievable transformation. The actress is now the cover girl of the leading magazine for the April issue. By the looks of it, she looks like she is on a voyage or expedition.

Sitting on a boat and dressed in a black and white lining pants, Parineeti aced the look by matching a red coat. She looked drop dead gorgeous. In another picture, it seems Pari is the captain of the ship and her wanderlust has taken her on to a new cruise. 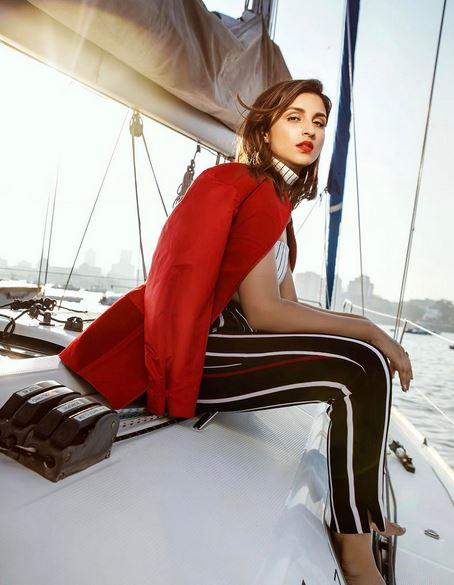 When it comes to her work life, Parineeti is already getting a lot of appreciation from the audience for her singing skills. Her first romantic song from the film Meri Pyaari Bindu is a Maana Ke Hum Yaar Nahin. The storyline has piqued the interest of many and so has her latest photoshoot. Be it singer Parineeti or Sailer Parineeti, the actress is acing several different avatars. Here are a few more pictures from the shoot that will leave you all speechless. This is got to be her finest photoshoots since a last few years. The pictures are captivating and endearing.

The gorgeous @parineetichopra for Cosmopolitan April 2017. Hair and make up by @marianna_mukuchyan styling by @amandeepkaur87

Someone just put me on a boat already!! #OceanCraving Thanks @cosmoindia for this month’s cover I love it!!! @errikosandreou @marianna_mukuchyan