Editor’s note: As the last chapter in the last book of the Harry Potter series ended on 1 September 2017, InUth will revisit the franchise and bring you a series of interesting articles pertaining to the books.

Joanne Rowling, who goes by the pen name of JK Rowling, released the first book from the Harry Potter franchise 20 years ago. Since then, she has amassed a huge following among young adult readers and has gone onto become one of the world’s highest paid celebrity novelists to have lived in recent memory. With 7 novels, 1 play and a few in-universe books to her credit, JK Rowling successfully created a fantasy world that became an essential part of the growing up years of many millennials.

JK Rowling has always been a very private person. She doesn’t give a lot of interviews and has never talked about the royalties she earned over the years through her books as well as through the movie rights. Her vast fortune has been a subject of rampant speculation. The information obtained below was collected from articles on Forbes, Fortune, The Wall Street and through a Quora thread with the assumption that the royalties amounted to 15 per cent of the book sales and that she received 10 per cent of the profits made from the movie adaptations.

Take a look at her supposed earnings:

Harry Potter and the Philosopher’s Stone

The first in the series of fantasy novels was released on June 26, 1997 in the UK. In the US, the book was released as Harry Potter and the Sorcerer’s Stone. The plot follows Harry Potter discovering his wizardly abilities and his magical heritage as well as his first year at the Hogwarts School of Witchcraft and Wizardry. The novel reached the top of the New York Times list of best-selling fiction in August 1999 and stayed around the top of that list for much of 1999 and 2000. Till the starting of this year, the book has sold over 110 million copies. The movie adapted from the novel was made on a budget of $125 million and had a wide release on November 16, 2001. The lifetime collections of the film amounted to around $974.8 million. 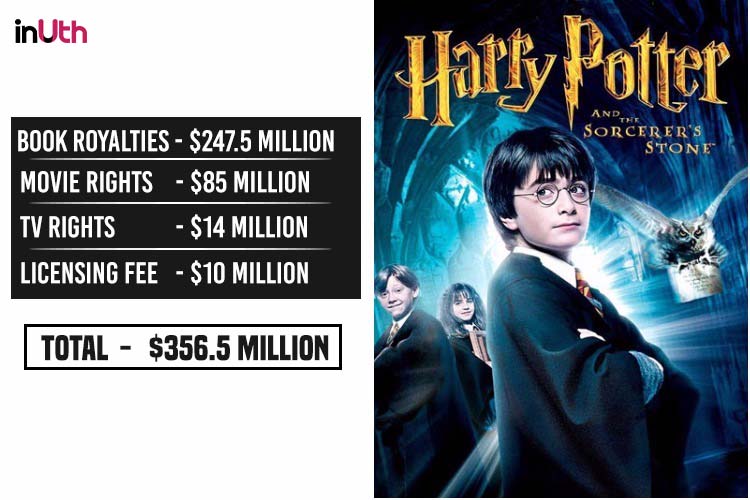 Harry Potter and the Chamber of Secrets

The second novel in the Harry Potter series was published on July 2, 1998. It immediately took the first place in UK bestseller lists and till now sold a whopping 60 million copies. The movie adapted from the novel was helmed by Home Alone director Chris Columbus and was made on a budget of $100 million. It’s lifetime Box Office collections neared around $879 million. 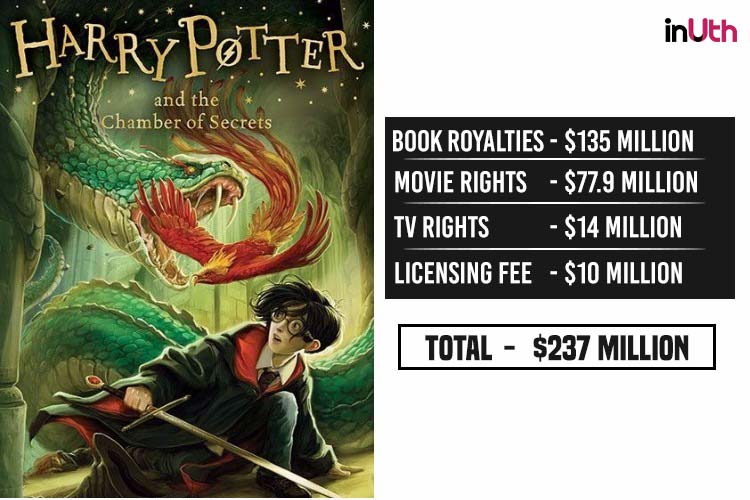 Harry Potter and the Prisoner of Azkaban

The third instalment of the fantasy series follows Harry Potter through his third year at Hogwarts, as he is informed that a prisoner named Sirius Black has escaped from the Azkaban prison with an intent to kill him. The novel was published on July 8, 1999, in the UK and won the 1999 Whitbread Children’s Book Award. The film adaptation was helmed by the now two-time Oscar-winner Alfonso Cuarón and was made on a budget of $130 million with lifetime collections grossing to about $796.7 million. 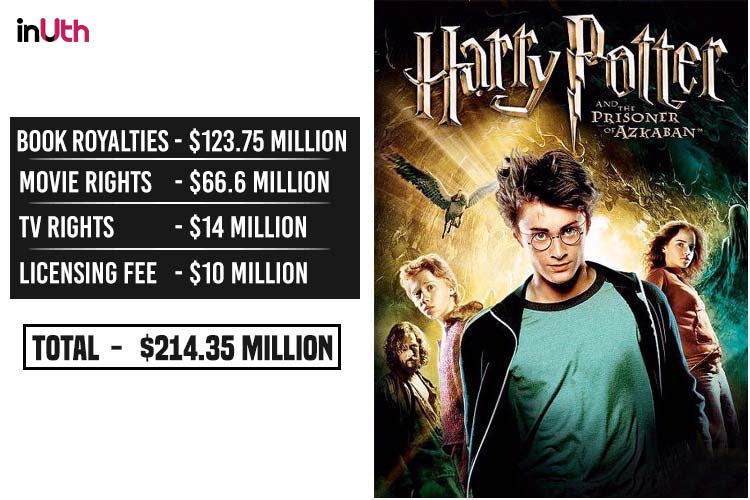 Harry Potter and the Goblet of Fire

The fourth from the Harry Potter series was the thickest book to have written by Rowling upon its publication. The author later revealed that it took her time to close a glaring loophole in the plot because of which the novel turned out to be thicker than its predecessors. The US-UK combined first print sold over 5 million copies and have till now sold copies 11 times over. The film based on the book released in 2005 and was made on a budget of $150 million. It collected over $896 million in its eight-week run. 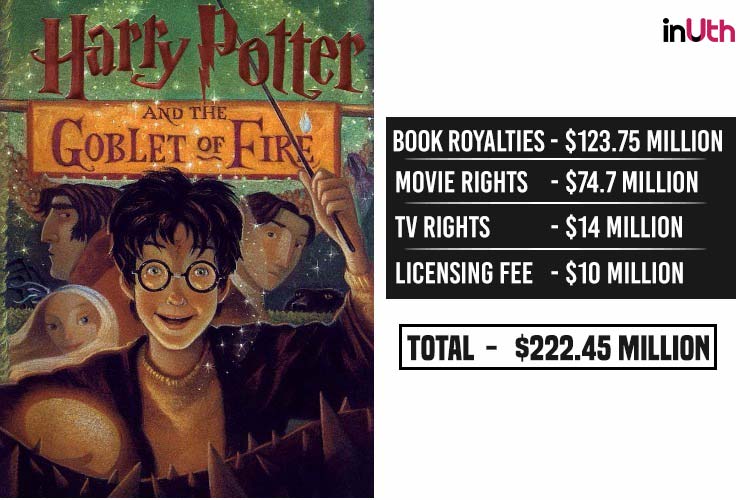 Harry Potter and the Order of the Pheonix

The antepenultimate novel in the Harry Potter series was also the thickest of the bunch, with the US edition numbering to around 870 pages. It was published on 21 June 2003 and sold over 5 million copies in the first 24 hours. The film adaptation opened to a worldwide 5-day opening of $333 million, grossing nearly $940 million in total, and as of April 2017, is the 41st highest grossing film of all time. 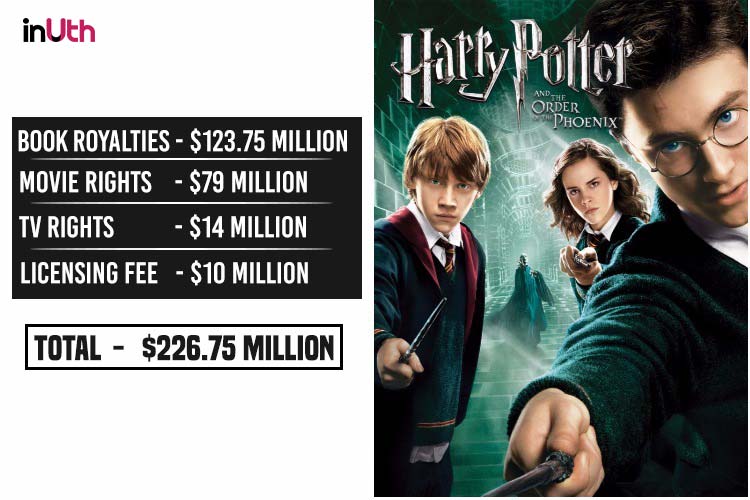 Harry Potter and the Half-Blood Prince

JK Rowling’s sixth novel is set during Harry Potter’s sixth year at Hogwarts and explores the past of Harry’s nemesis, Lord Voldemort. It won several honours upon its publication including the 2006 British Book of the Year award and has sold a record 65 million copies. The movie adaptation was made on a budget of $250 million and amassed around $934.4 million in Box Office collections. 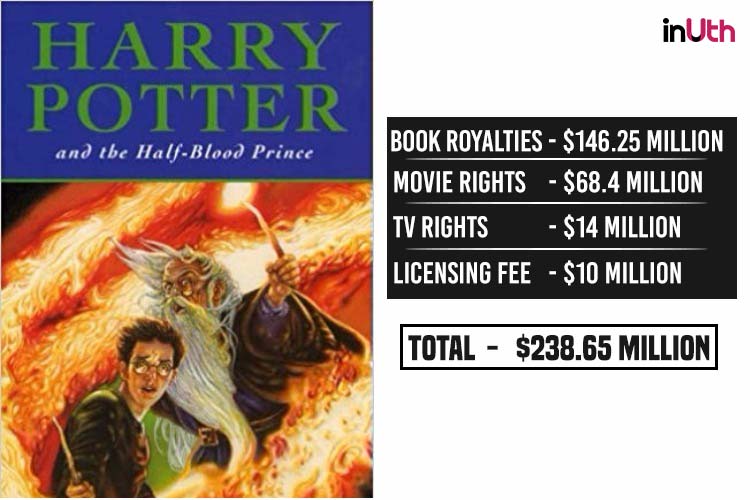 Harry Potter and the Deathly Hallows

The final novel in the Harry Potter series was released on July 21, 2007, ten years after the publication of the first instalment. The novel chronicles the events following The Half-Blood Prince and the final confrontation between Harry Potter and Lord Voldemort. More than a million copies were pre-ordered through Amazon.com and Barnes & Noble and the book holds the Guinness World Record for the fastest selling book of fiction in 24 hours for US sales. The plot of the novel was so huge that the movie adaptation had to be made in two parts. The total budget of both the movies combined was under $500 million. The first part earned around $960 million worldwide while the second part collected around $1.3 billion at the Box Office. 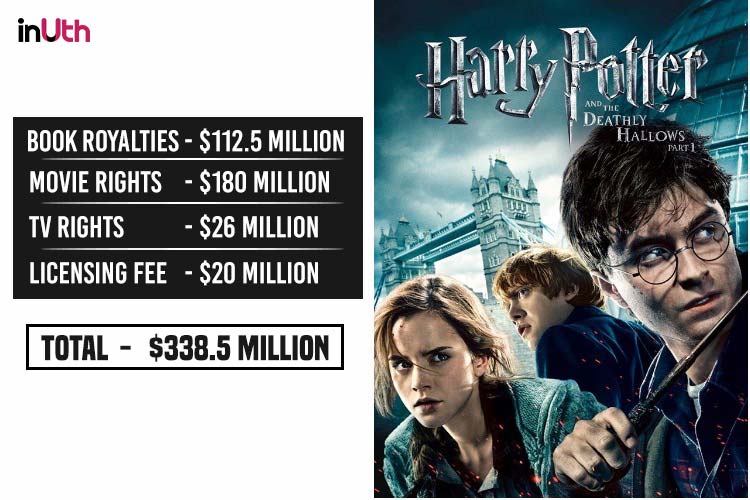 Fantastic Beasts and Where to Find Them

JK Rowling wrote the book under the pen name of fictitious author Newt Scamander, with the aim of benefitting the charity Comic Relief. Published in 2001, the book is about the magical creatures in the Harry Potter universe and was one of the books in the syllabus of Harry Potter’s academic years. Over 80 per cent of cover price sold went directly to the benefit of poor children in various places around the world. The book, along with its companion Quidditch Through The Ages raised over $23 million. Though JK Rowling didn’t earn through the publication of the books, she secured the books’ movie and satellite rights. The movie adaptation starring Oscar winner Eddie Redmayne was released in 2016 and took home about $640 million in profits. 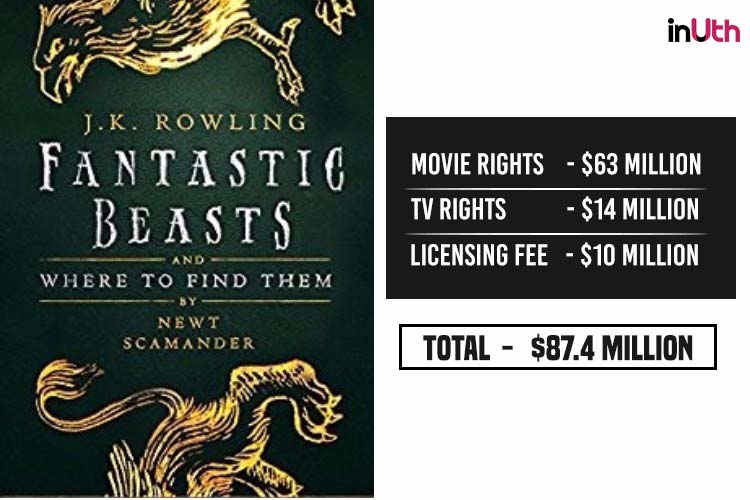 Harry Potter and the Cursed Child

Harry Potter and the Cursed Child is a two-stage play written by Jack Thorne and is based on an original new story by Rowling. The story starts off 19 years after the last novel in the Harry Potter franchise ends. Both parts of the stage play’s script were released in print and digital formats. The book sold 2 million copies in the first two days of release in the US and Canada. The opening tickets of the stage adaptation were priced between $40 and $172, however, the ticket reselling agencies sold the seats for up to $4000. 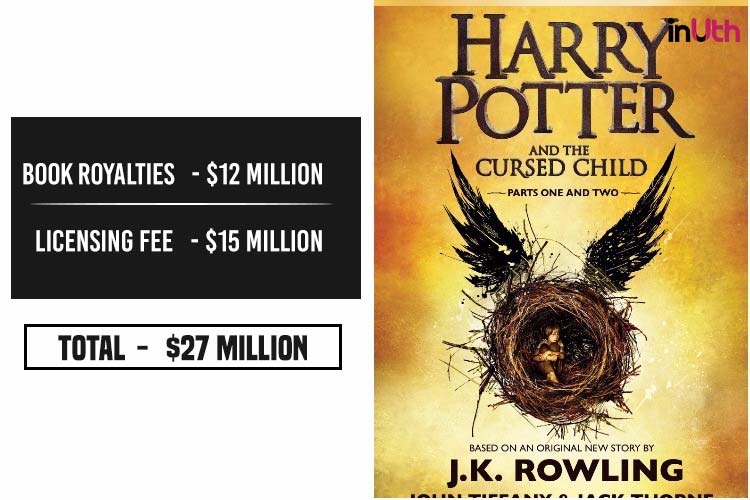 With a one-time licensing fee of $100 million that she earned through the Wizarding World theme parks and the $125 million TV rights licensing deal of the eight Harry Potter movies, JK Rowling’s combined earnings amount to around $1.94 billion (Rs 12416 crore), however, the number does not take into account the fee she earned from the play, licensing fee of the Harry Potter merchandise, investment income, and capital gains.

Feeling a bit poor, are we?