Sucheta Kriplani was one of the prominent faces of Indian freedom struggle and later also got recognition as India’s first woman chief minister serving as the head of the Uttar Pradesh government from 1963 to 1967.

Born on June 25, 1908, into a Bengali Brahmo family, she completed her education from Delhi’s Indraprastha College. She moved on to teach Constitutional History at Banaras Hindu University as a lecturer. Her father SN Majumdar was a doctor and was always dedicated to serving the people of the nation. At the BHU, she came in contact with Acharya Kriplani, a prominent figure of the Indian National Congress, who was 20 years senior to her. Love blossomed between the two and they tied the knot in 1936.

Sucheta is especially remembered for her role in the Quit India Movement of 1942. She is one of the women activists known for fearlessly confronting the British colonial government. She is also credited with establishing the women’s wing of the Congress party in 1940.

She worked closely with Mahatma Gandhi during partition riots. Mahatma Gandhi was very impressed with her commitment and dedication to serving the nation. On his reference, she was appointed as the Organizing Secretary of the Kasturba Gandhi National Memorial Trust in the year 1946.

Member of the Constituent Assembly

She played a key role in shaping the contours of an independent India. She was a member of the Constituent Assembly tasked with drafting the seminal document that would be governing the new India. She was one of the 15 women members of the 299-member assembly. The other prominent faces were Sarojini Naidu, Vijayalakshmi Pandit, Purnima Banerji, Ammu Saminathan.

While most remember the iconic ‘tryst with destiny’ speech that India’s first Prime Minister Pandit Nehru delivered on the eve of Independence, many may not know that after his speech, Kriplani sang Vande Mataram at the same constituent assembly. 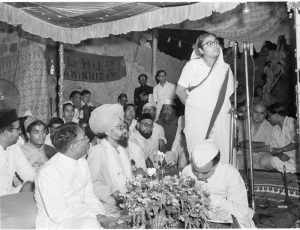 After independence, Kripalani continued her political stint and served as Member of Parliament from New Delhi constituency in First Lok Sabha election (1952) on Kisan Mazdoor Praja Party (KMPP), a breakaway faction of INC founded by her husband.

She won from the same constituency five years later also but this time on Congress ticket. From 1960-63, she served as the Minister of Labour, Community Development and Industry in Uttar Pradesh government. In October 1963, she took oath as the chief minister of Uttar Pradesh, becoming the first woman in any Indian state to be elected to the top post. She stayed as the CM of Uttar Pradesh till March 1967. When she was asked about her and Acharya’s different political loyalties, she had famously said, “What can be a better example of democracy within a family?”

The highlight of her three and half year rule was the firm handling of a state employees’ strike. The strike continued for 62 days but Kripalani did not relent, the employees had to go for compromise at last. She was the only woman chief minister UP has seen before Mayawati. 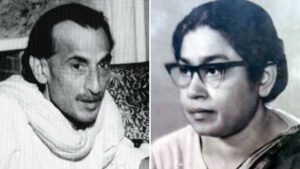 She retired from politics in 1971 and remained in seclusion until her death in 1974.

As India celebrates 70 years of independence, we bring you stories of women who were part of the Indian Independence Struggle. You might have heard about some of them but most do not find a mention in our history books or popular memory. These were ordinary women from all walks of life who managed to make extraordinary contributions to the cause of freedom. TThis series is our tribute to these women and their exemplary work. We bring you 70 stories of courage and valour over the next one week leading up to 15th August 2017. Write to us, if you have any names to add to this list. Email: inuthsocial@indianexpress.com