Sarala Devi Chaudhurani was not only a great nationalist but was an impressive politician as well. Apart from being the first woman political leader of her time, she was a prolific writer, a great singer and a true feminist.

She was born in Kolkata in 1872 into an illustrious Bengali family. Her father, Janakinath Ghosal, was one of the earliest secretaries of Bengal Congress. Her mother, Swarnakumari Devi, was the elder sister of Rabindranath Tagore and the first successful female novelist of Bengali literature. She got married to Rambhuj Dutta Chowdhury who was a lawyer-cum-journalist. 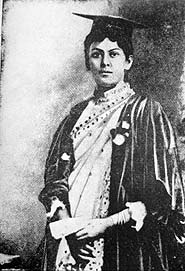 At a time when sending girls to school was considered a taboo, her liberal father encouraged her to complete her education. In 1886, she passed her University Entrance examination and in 1890, she passed her B.A. examination in English literature from Calcutta University and received the Padmavati Gold Medal.

She was a music enthusiast. In fact, she made her entrance into politics through the medium of music. She was committed to awakening the nation through her music. Although Rabindranath Tagore created the tune for the first two lines of ‘Bande Mataram’, it was Sarala Devi who put the rest of the music. She sang the nationalistic song in her mellifluous voice in the Benaras session of the Congress and contributed widely to its nation-wide popularity.

After marriage, she got even more involved in political activities and helped her husband in editing the powerful nationalist Urdu weekly newspaper ‘Hindustan’. She also published an English edition of the paper. Later when the Rowlatt Act was passed she used the medium to vociferously criticise the government’s stand. Her husband was arrested while Sarala Devi was not apprehended as Britishers were worried that arresting them both may lead to further complication. She came in touch with Mahatma Gandhi in Lahore and was heavily influenced by his principle of truth and non-violence. She devoted herself to the cause of the nation. Later, her only son, Dipak, got married to Gandhi’s granddaughter Radha. However, in the beginning, she was not a supporter of the Congress but was attracted to the revolutionary philosophy. She maintained a close link with the Suhrid Samiti, a secret revolutionary society.

One of the primary goals of her life was women empowerment. She took it upon herself to educate women and formed the Bharat Stree Mahamanda. The organization opened several branches in Lahore (then part of undivided India), Allahabad, Delhi, Karachi, Amritsar, Hyderabad, Kanpur, Bankura, Hazaribagh, Midnapur and Kolkata. Her outfit aimed to develop a system of home-education for married girls and helping them have greater access to medical knowledge and medical care.

Sarala Devi also rendered valuable service to the cause of Bengali literature. Sarala Devi introduced Birash-tami Utsav (Festival of Heroes) on the second day of the Durga Puja, with a view to inspire the youngsters of Bengal with the ideals of heroism. They had to stand around a sword and chant a poem having the names of heroic men and when each name was pronounced, the participants were to throw flowers.