While most of us are aware of the contributions of Rani Lakshmibai in revolt against British oppression in 1857, there was another queen who had also fought valiantly against the imperialist power. Avanitbai or Avanti bai Lodhi was the wife of Maharaja Vikramaditya Singh, the ruler of the Ramgarh estate, which at present comes under Madhya Pradesh.

Born in 1831, she was married to Prince Vikramaditya at an early age. However, when Vikramaditya became the King and could not handle the administration due to his failing health, Avantibai rose to the occasion and took charge of the affairs of state.

After the King’s death in 1951, the British did not accept her sons Aman Singh and Sher Singh as heirs to the throne as they were minors and declared the princely state as ‘Court of Wards’ appointing their own administrator there. Britishers were then annexing the kingdoms which had no biological heir in the name of doctrine of lapse policy.  In those days, such an act was considered a humiliation, Avantibai vowed to fight the British to regain her land and her throne. The queen threw the administrator out and declared war against British.

She raised an army of 4,000 and personally led it against the British in 1857. Seeking to infuse patriotism and to unite, the queen wrote a strong-worded letter to the rulers of the neighboring estate. She had written, “If you think you have a duty towards our enslaved mother India, raise your swords and jump into the war against the British, otherwise wear these bangles and hide your self in houses.”

Her appeal aroused a wave of revolution in the central provinces. She was joined by the ruler of Vijayraghavgarh, Suraj Prasad, the entire northern region joined her for an armed rebellion.

In the first encounter which took place in a village named Kheri, British troops were handed a stunning defeat. However, the British came back with vengeance and launched an attack on Ramgarh. The courage of the Queen was, however, not enough to defeat the might British military. The invaders came back with full force and launched an all out military attack on Ramgarh. Avantibai was forced to move to the dense forests on the hill of Devharigarh. She later resorted to guerrilla warfare and attacked the camp of British General Waddington and dispersed his army. 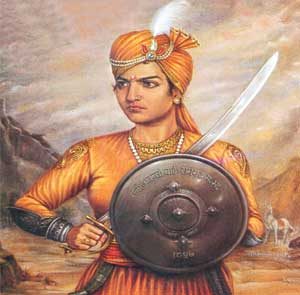 Facing an imminent defeat, the valiant queen decided to sacrifice her life rather than going through the humiliation of surrender. On 20th March 1858, Rani Avantibai Lodhi became a martyr.

As India celebrates 70 years of independence, we bring you stories of women who were part of the Indian Independence Struggle. You might have heard about some of them but most do not find a mention in our history books or popular memory. These were ordinary women from all walks of life who managed to make extraordinary contributions to the cause of freedom. This series is our tribute to these women and their exemplary work. We bring you 70 stories of courage and valour over the next one week leading up to 15th August 2017. Write to us, if you have any names to add to this list. Email: inuthsocial@indianexpress.com
Trending
photos