Rajkumari Gupta belongs to that clan of freedom fighters who are unlikely to have found a mention in any standard history of the freedom movement. She was born in Banda zilla of Kanpur in 1902 to a father who was a grocer and her mother who practised purdah. She got married at an early age of 13 to Madan Mohan Gupta who was a revolutionary but was also an active participant in the activities of the Congress. Both she and her husband were drawn towards the ideals of Mahatma Gandhi and joined the freedom struggle on his call.

However, she later got influenced by the revolutionaries who believed in armed rebellion against Britishers. She was closely associated with Chandrashekhar Azad and began supporting him by secretly carrying messages and materials to other revolutionaries, without the knowledge of her husband and her in-laws. She got closely connected with Azad’s group in Allahabad, which was later led by Bhagat Singh.

Not many are aware of her role the famous Kakori train robbery that went on to be deemed a conspiracy. She was given the charge of delivering firearms to revolutionaries.

She served jail terms in 1930, 1932 and 1942. Revealing that she had close connections with Chandra Shekhar Azad’s group in Allahabad, she had once said: “Hum upar se Gandhivaadi the, neeche se krantivaadi.” (We were Gandhians from above; underneath we were revolutionaries). 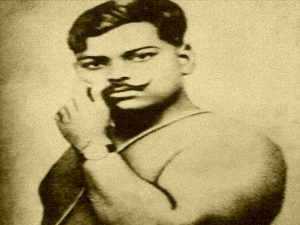 She was arrested when she was walking through the fields along with her three-year old son, hiding firearms under her garments. On hearing the news of her arrest, her in-laws disowned her. They also got an article published in the local newspaper Vir Bhagat, claiming to not have any relationship with her. She led a reclusive life after that.

As mentioned in Women in the Indian National Movement: Unseen Faces and Unheard Voices, 1930-42 by Suruchi Thapar-Bjorkert, she had once recited:

As India celebrates 70 years of independence, we bring you stories of women who were part of the Indian Independence Struggle. You might have heard about some of them but most do not find a mention in our history books or popular memory. These were ordinary women from all walks of life who managed to make extraordinary contributions to the cause of freedom.  This series is our tribute to these women and their exemplary work. We bring you 70 stories of courage and valour over the next one week leading up to 15th August 2017. Write to us, if you have any names to add to this list. Email: inuthsocial@indianexpress.com