While many laid their lives for Indian independence, the sacrifice of great revolutionary Matangini Hazra stands out for its own reason. She was affectionately called Gandhi Buri (Bengali old lady Gandhian) for her simplicity and austere life.

Matangini was born on 19 October 1870 into a poor peasant family in a small village in Tamluk in West Bengal’s Midnapore district. She was married to a 62-year-old affluent widower when she was a minor. Consequently, she became a widow at the age of 18 without bearing an offspring. She led a pious life, often helping others in distress.

In 1905, she began taking a keen interest in the Indian independence movement as a Gandhian. Notably, Midnapore was famous for the participation of women in the freedom struggle. Matangini was one of those who went on to become most prominent among them.

In 1932, she joined the Civil Disobedience Movement and was later arrested for breaking the Salt Act. Even after she was released, she continued her protest for the abolition of the tax. After release, she became an active member of Indian National Congress. Being a true Gandhian, she regularly spun and wore khadi. She was jailed more than once, but the police were embarrassed to detain her for more than a few hours because of her sex and age.

In 1933, she attended the subdivisional Congress conference at Serampore and was injured in the ensuing baton charge by the police. In the same year, Sir John Anderson, then Governor of Bengal, came to Tamluk to address a well-screened gathering but in spite of the security, Matangini managed to stage a black flag demonstration in front of the dais. She was incarcerated for six months at Baharampur. 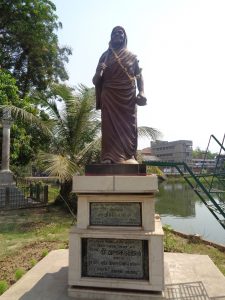 During the Quit India movement, members of the Congress planned to capture the various police stations of Medinipur district and other government offices. 73-year-old Hazra led a procession of six thousand supporters, mostly women volunteers, with the purpose of taking over the Tamluk police station. When the procession reached the outskirts of the town, they were ordered to halt by bayonet-clutching British soldiers. As she stepped forward, Hazra was shot once. Apparently, she had stepped forward and appealed to the police not to open fire at the crowd. As she was repeatedly shot, she kept chanting Vande Mataram, “hail to the Motherland”. She died holding Indian National Congress fly in her hand.

The Biplabi newspaper of the parallel Tamluk National Government commented:

“Matangini led one procession from the north of the criminal court building; even after the firing commenced, she continued to advance with the tri-colour flag, leaving all the volunteers behind. The police shot her three times. She continued marching despite wounds to the forehead and both hands.”

In 1977, the Government of West Bengal erected a statue in her memory in Kolkata.