Not many of us know about the heroic deeds of Pritilata Waddedar, a 21-year-old revolutionary who took an active part in the Chittagong uprising movement in the 1930s. She was known for leading a raid on the Pahartali European club on September 23, 1932. She chose to lay down her life instead of being arrested by the British. Ashutosh Gowariker’s 2010 movie Khelein Hum Jee Jaan Sey was set in the backdrop of the Chittagong uprising. While Abhishek Bachchan played the role of freedom fighter Surya Sen, Vishakha Singh essayed the role of Pritilata Waddedar.

Pritilata Waddedar was born on May 5, 1911 in Chittagong, now in Bangladesh. Her father was a clerk and mother a housewife. Right from an early age, Pritilata was inspired by Rani Lakshmibai of Jhansi and was inclined to join the freedom struggle against the British. After pursuing her higher education in Kolkata, she returned to Chittagong where she took the job of a headmistress at a local English medium school. In 2012, she was posthumously awarded the degree by the University of Calcutta. The British government had withheld her degree in the 1930s. 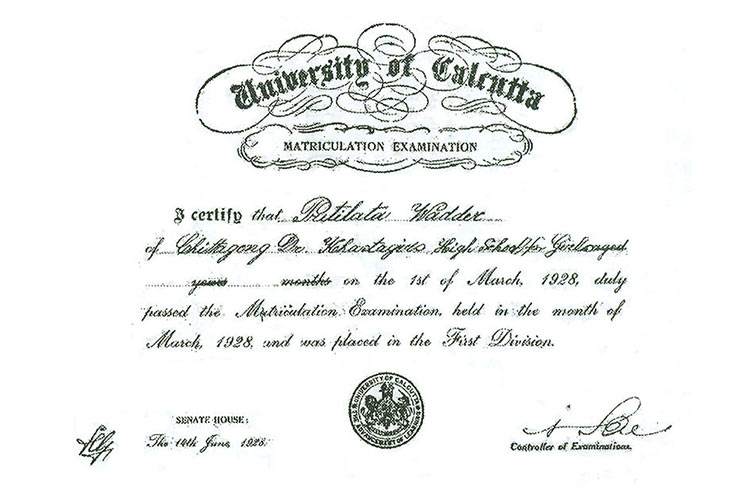 A snapshot of Pritilata Waddedar’s matriculation certificate issued by the University of Calcutta in 1928. (Photo: Wikipedia)

Surya Sen had gathered a group of revolutionaries to fight against the British. He heard about Pritilata and was keen on her joining the group. However, a member named Binod Bihari Chowdhury was against women joining their group. At last, Pritilata was allowed to join as the members cited that a woman would not be under suspicion by the British while supplying arms for the struggle.

Also read: Mirra Alfassa: ‘The Mother’ who motivated Annie Besant to fight against the British

On September 23, 1932, Pritilata was assigned the task to ambush the Pahartali European Club in Chittagong. She donned the look of a Punjabi man and led an attack on the club that had signboard reading “Dogs and Indians not allowed.” The revolutionaries decided to divide themselves into three groups to carry out the attack. Among the 40 people present inside the club were some police officers who retaliated, injuring Pritilata in the gunbattle. The brave leader was trapped by the cops, but she swallowed cyanide to evade an arrest.

Also read: Gulab Kaur: The woman who distributed arms in Ghadar movement while posing as a journalist

Pritilata is considered as one of the greatest revolutionaries to have fought for freedom against the British. Vishakha Singh, who played the role of the freedom fighter in Khelein Hum Jee Jaan Sey, told The Indian Express in 2010 said that she felt proud to play the role of a woman who carried out a daring attack on an Englishmen’s club at a very young age.

As India celebrates 70 years of independence, we bring you stories of women who were part of the Indian Independence Struggle. You might have heard about some of them but most do not find a mention in our history books or popular memory. These were ordinary women from all walks of life who managed to make extraordinary contributions to the cause of freedom.

This series is our tribute to these women and their exemplary work. We bring you 70 stories of courage and valour over the next one week leading up to 15th August 2017. Write to us, if you have any names to add to this list. Email: inuthsocial@indianexpress.com