Bhima Bai Holkar is said to be the first woman who wielded her sword against the Britishers. She is widely believed to have inspired queen of Jhansi Lakshmi Bai to fight against British oppression.

Born on September 17, 1795, she was the grand daughter of illustrious queen Ahilya Bai Holkar and daughter of Yashwant Rao Holkar, Maharaja of Indore. Since Indore estate, ruled by Holkars, was an affluent Kingdom, Britishers were lurking their eyes on it. It was no coincidence that she was named Bhima due to her indomitable boldness. She was well versed in all warfares but excelled in Guerrilla warfare.

Bhima prematurely lost her husband and began living the secluded life of a widow. Soon she lost her father too. When she came to know that Britishers are planning to annex the state of Indore, she lamented that her motherland “which had been made prosperous by the blood and sweat of illustrious ancestors like Ahilya Bai Holkar and my father must be saved from the clutches of the foreigners.” She put away the veil of a widow and vowed to fight Britishers.

On 21 December 1817, an Army of East India Company led by Sir Thomas Hislop, attacked the Holkar army led by 11-year-old Maharaja Malhar Rao Holkar II, and  22-year-old Bhima Bai Holkar. The Holkar artillery, led by Roshan Beg, attacked them with a long line of 63 cannons. At one point, the British were on the verge of losing the battle. 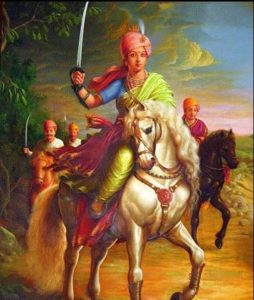 However, they were helped by Gafur Khan, a traitor in the Holkar’s camp. Khan deserted the battlefield with the force under his command. After this, the Holkars were decisively defeated. By the treaty of Mandsaur on 6th January 1818, made after this defeat, all the Holkar territory south of the Satpudas, including the entire province of Khandesh, was ceded to the British.