The Supreme Court left behind shackles of a colonial-era law as Section 377 was partially struck down last week. Now, it’s likely to open a floodgate of opportunities for India’s $2.6 trillion economy. Something India needs since it’s been losing as much as 1.4 per cent of its national output because of the discriminatory law, according to this report.

Simply put, India has possibly been throwing away more than $26 billion a year when it continued to marginalise the LGBTQIA+ community.  Now, with the rainbow flags flying high, Indian markets could benefit from the vast spending power of the queer community.

The Power Of Pink

LGBTQIA+ community can expect to see businesses lining up to offer a vast range of tailored products, in fashion, health, tourism and other industries as well. LGBTQIA+ bars, clubs and cafes will provide new employment and boost sales in the food and alcohol industries while people will be able to attend holidays designed specifically for the queer community without fear of legal reprisal.

“It can bring billions of dollars to the Indian economy if they can activate the spending of gay people in India,” Keshav Suri, a hotelier and petitioner in the landmark case, told AFP.

“The value of the pink economy and the social aspects of the LGBT community are too large now for us to ignore,” he added. 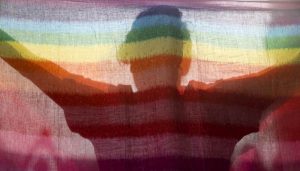 Many corporations in India recognise the links between inclusion of gay employees and better business outcomes. Companies like Godrej Group, Tata Group, and Mahindra & Mahindra, among others, have openly supported inclusive workplace policies in India. However, it should not be used to gloss over the discrimination faced by the community at other workplaces in the country.

Around 40% of the working gay community has claimed that they have been harassed at their workplace, underlining the need for openness and inclusiveness at Indian workplaces. Considering that about 35% of one’s waking hours (working life period) is spent at work.

In the absence of any official survey, the government of Indian in 2012, had told the apex court that population of the queer community in India is around 25 lakh. Out Now Consulting, a marketing agency that helps businesses target gay and lesbian consumers, however, puts the LGBTQIA+ figure in India at 55 million. Indian businesses could cater to this potential market and hugely benefit from them. Their nominal income is around $113 billion annually, the firm estimates. LGBT couples have fewer children than other groups and higher-than-average salaries, meaning plenty of disposable cash.

In the US, same-sex couples tend to have higher median incomes – a 2016 report by the US Treasury Department revealed. The average household income of gay couples at was $1,76,000 and that of lesbian couples was $1,24,000, while that of heterosexual couples was $1,13,000.

In fact, a report by a Hong Kong-based LGBTQIA+ Foundation said that if the community were a country, it would be the world’s fourth-largest economy in the world, boasting of a GDP worth $4.6 trillion.