The BRICs((Brazil, Russia, India, China and South Africa)) summit displayed what an astute player of geo-politics Prime Minister Narendra Modi is .  One has to admire the way he brought home India’s concern about a Russia’s maiden joint military exercise with Pakistan in the aftermath of Uri attacks.

In chaste Russian, quoting a Russian maxim he said: “an old friend is better than two new friends.” Russian President Vladimir Putin smiled back. The message was definitely not lost.  Another defining moment of the event was that all BRICs leader donning Nehru jackets of different hues while holding their hands.

So far, so good. Personal touch can take you only so far. Russia and China, the two powerful and more significant member states of the construct eventually did what they had to. India continued its attempt to globally isolate Pakistan even at the BRICS platform. Modi called Pakistan the “mother ship of terrorism”. The central focus for India was to punish Pakistan for its continued offensive at the border.

Not that it hasn’t succeeded at all. The fear of international isolation looms large over the Pakistani civilian government. Pakistan was quick to respond to Narendra Modi’s statement. Pakistani Prime Minister Nawaz Sharif’s Adviser on Foreign Affairs Sartaj Aziz on Sunday accused Narendra Modi of “misleading” the BRICS countries .“Mr. Modi is misleading his BRICS and BIMSTEC colleagues,” Mr. Aziz alleged.

However, the scope and appeal of Modi’s aggressive speech was limited to the Indian audience as the joint statement didn’t reflect any consensus either on terrorism or on bashing Pakistan on the issue. It had no mention of Pakistan or “Uri attacks”, or “cross-border terrorism” or any Pakistan-based terror organsiation like Jaish e Mohammad or Lashkar e Taiba.

China’s presence in the room made sure nothing against Pakistan’s interest made it to the joint statement. It dampened India’s scheme of using a multilateral problem to highlight its bilateral problems with Pakistan.
China has been acting as a roadblock in India’s ambitions of getting into the prestigious National Security Group or it’s longstanding wish to be a permanent member of the Security Council of the United Nations.

With “old friend” Russia too showing interest in Pakistan, calling the neigbouring country “mother-ship of terror” didn’t get the cheers and whistles it deserved. Unless, of course Modi was speaking only to the Indian audience.
Here are some cartoons we sourced from the net and newspapers that sum up India’s Pakistan dilemma at BRICS. 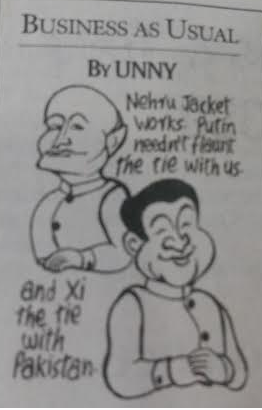