On October 19, at around 12:15 am, students of Jawaharlal Nehru University (JNU) lay siege of the administrative block. Their target: Vice-Chancellor of the university M Jagadesh Kumar, other key officials. Their aim: To find Najeeb Ahmad, a 27-year-old MSc Biotechnology first year student, who has been missing for last six days. The students blame the JNU administration for not doing enough to find Ahmad.

The news hits the national media. Headlines like “JNU under siege” runs for half a day until the Vice-Chancellor is ‘rescued’. But what is the real story? Where is Ahmad? Why has he disappeared?

The campus is rife with rumours. Some true. Some hearsay. Some can be possibly verified, some contested. We bring you some of the voices over the issue to tell you the real story about WHERE IS NAJEEB AHMAD?

The story starts with a fight that took place in room number 106 at the Mahi Mandavi hostel on October 14. There are various versions. Some claim Ahmad slapped ABVP candidate Vikrant who is contesting for the post of mess secretary. Others say, Najeeb was assaulted by ABVP members.

“Vikrant was contesting elections for the post of mess-secretary of Mahi Mandavi hostel and went to Najeeb’s room seeking support. When he handed over the pamphlet to Najeeb, the latter slapped him. When he asked the reason, he got slapped again. He even questioned the sacred thread worn by the candidate on his hand. When Mukesh and Ankit tried to intervene, Najeeb pushed them and they fell down,” ABVP member Vijay Kumar said.

Disciplinary action was taken. Kumar says, Najeeb was held guilty of slapping Vikrant and was ordered to vacate the hostel by October 21. “Even Najeeb admitted that he had committed a mistake.”

However, Umar Khalid, who came into limelight for his role in the “anti-national” protests at JNU in February, asserted that there will be no normalcy till Najeeb is found and the goons who assaulted him are brought to book.

“All we have been demanding from the Vice Chancellor is a simple FIR. The vice-chancellor refuses to have a dialogue with the students. He did not come to talk to the students till the media came,” Khalid said.

But the university has denied all allegations. It has maintained a firm stand claiming that no stone is being left unturned to find Najeeb. Making desperate calls for calm, the V-C reached out to protesting students but to no avail.

“The students are very adamant and are not letting us go out of this building. One of the demands is that we should contact the police which we have already done. We have written several letters to the police and our officials are in regular touch with the police to search Najeeb Ahmad,” the VC said.

“The other demand that was made is that the entire incident should be investigated. The chief proctorial office is already investigating and if anyone is found guilty we have assured the agitating students that they will be punished as per the university rules. Students also demanded from the administration to make an appeal to Najeeb to return which we already have done,” he added.

In a notice issued on Najeeb’s disappearance on October 17, the JNU administration had mentioned him as the ‘accused’ who was involved in a case of violence at the hostel. The protesting students claim this to be a half-baked truth. 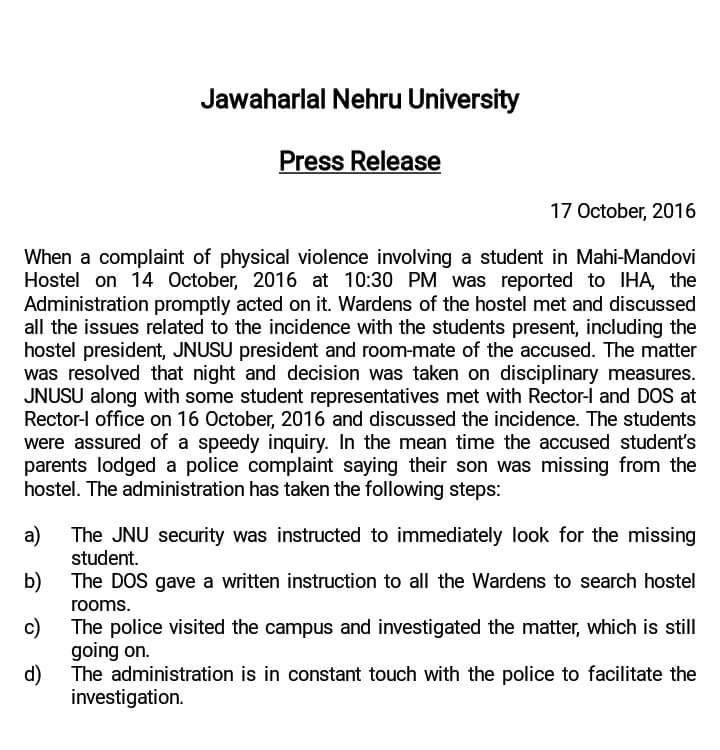 The protests so far:

Over the past six days, the agitated students have organised various protests and marches to get the attention of the varsity to locate the missing student. However, the university authorities are claiming that they are already in touch with the police and such protests are doing any good.

In an unprecedented incident, the agitated students on Wednesday gheraoed Vice chancellor Jagadesh Kumar and other university officials at the administration block and rejected all attempts by the management to placate the situation. A large number of students sat outside the administration block saying the officials were free to walk over them. After sloganeering and demonstration, the students blocked the gates of the building.

In a series of tweets throughout Wednesday night, the Vice Chancellor attempted to reach out to the students to stop the agitation but to no avail.

Since the students did not let us go home inspite our appeal, we have no other option but be confined to the admin building.

Today we have Academic Council mtg at 2.30 PM and it should go on with no interruption. Appeal to agitating students of JNU below: pic.twitter.com/kNduBIXO16

Slogans of “Hum Sab Najeeb” were heard overnight during the “siege”. While the VC urged the protesters not to resort to illegal means, students defended their stand and claimed there had been no “illegal detention”.

“We have not illegally confined anybody in JNU administrative building. Electricity and all kind of supplies are here. We have also sent food for people inside,” Mohit Pandey, President, JNUSU said.

Concerned over the issue, Centre intervened in the matter with Home Minister Rajnath Singh asking Delhi Police Commissioner Alok Kumar Verma to submit a report on the whole episode.

Minister of State for Home Kiren Rijiju also commented that it seems that some students go to JNU just for doing politics, and not for studying.

“It is very wrong to confine the vice-chancellor and other officials of the university. JNU is a big institution. Students should concentrate on studies. They should carry all their activities within the frameworks of law and order,” Rijiju said.

Gheraoing VC and other officials is sad, it seems some students come to do politics and not study: Kiren Rijiju,MoS Home #NajeebAhmad pic.twitter.com/cfAJBCexvd

The Delhi Police has announced a cash reward of Rs 50,000 on any information on Najeeb but there no traces of him have been found so far even on the sixth day. Ahmad was allegedly assaulted by ABVP activists on October 14 during a mess election campaign at Mahi-Mandvi hostel. From the next day, he went missing. According to students, he left the hostel without his wallet, mobile and even his footwear.

At the end of the day, the varsity got into headlines, the ABVP and the Left got their voices heard but what is appaling is that there is still no trace of the missing student. Everyone is discussing the age-long political rivalry at the university but no one seems to be asking the question: Where is Najeeb Ahmad?