In West Bengal’s Alipurduar, a video shot at a school event is making people anxious. Why, you wonder? It’s because the footage shows female teachers display ‘unladylike, hip-swinging’ dance at a function where everyone in school was supposed to have fun. As soon as the video went viral on social media, people gasped in disbelief. Comments like “Oh! How could they!?” and “It’s a school, not a bar!” were thrown around.

The ‘scandalous act’ these teachers at Barobisha Balika Vidyalaya in Alipurduar were accused of was dancing at a school function on August 13. This brings us to the question why we see teachers as individuals, who are the epitome of discipline, and must be feared if they are to be respected.

Why has all of hell broken loose because these female teachers decided to just be human in front of their students? It’s understandable if people terming their behaviour ‘inappropriate’ on social media did so because they were dancing while doing their job, but that’s not what is bothering this particular section of netizens. They say that these women were polluting impressionable minds.

These are a few of the reactions: 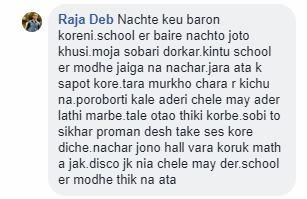 Translation: “No one has asked them not to dance. They could’ve happily danced outside the school. Everyone needs to have fun. But a school is no place to dance. People who are supporting this are morons. Later in life, these people’s kids will disown them. Then that is also justified….If they wanted to dance, they should’ve taken the kids to a hall or gone to a field or a disco. This is not okay inside a school.”

Translation: “It would’ve been better if they became bar dancers instead of teachers.”

Translation: “If they wanted to have fun, they should’ve gone to a picnic spot and not done it in the school. A school is a place of learning and not dance.”

Translation: “Have they been trained to interact with students by dancing to party songs? I want to know the name of this training centre.”

But have the naysayers considered that maybe a day of informal interaction would help in cementing a healthy teacher-student relationship? It would probably make teachers more relatable, breaking the stern, non-emotive, archetypal characteristics that we expect them to exhibit. And, if a school is not a place where you can dance then should extracurricular activities be discontinued to appease this crowd?

Drawing from personal experience, I was always scared to death to clear a doubt from a teacher because I expected them to transform into this monster, who would berate me for not knowing the solution. That’s counterproductive because if you can’t humanise your teacher, it’s impossible for a child to feel that the teacher is, after all, an ally. Someone whose purpose is to help you figure out things during the formative years.

Cultivating a culture of fear to evoke reverence serves no purpose.

If one were to argue how the ‘act’ of the teachers could influence young minds, then let’s introspect on whether we’re outraging because these were female teachers. Not long ago, we celebrated another educator, crowned him as the ‘dancing uncle’ and made his videos viral. We demanded more of his amazing dancing skills and celebrated him. For the uninformed, the ‘dancing uncle’, whose moves made him internet’s darling, is a professor from Madhya Pradesh. Why did we not outrage when he was dancing about and infecting young minds with his moves? Double standards, much?

It’s the selective disapproval that exposes social media’s patriarchal tendencies. As a society, we want to have the power to define relationships. We want to domineer how everybody behaves. Now, anyone with a social media account has an opinion on what’s appropriate. But, let’s take a moment here and think before we comment. After all, we are all human — and we all want to dance like nobody’s watching. So, instead of hating on something that is innocent and fun, and for all purposes — helpful, can we turn up the music and let people dance?