A Muslim man was thrashed by a mob outside a Ghaziabad court on Monday when he was trying to get married to his Hindu girlfriend.

The mob which thrashed a Muslim man outside a Ghaziabad court on Monday for getting married to a Hindu woman were shouting slogans of ‘Jai Shri Ram’ and alleged the man was indulging in ‘Love Jihad’, the witnesses and the lawyer whom the couple had approached for the registration of their marriage, have said.

According to police, 24-year-old Sahil Khan and Preeti Singh were in relationship for four years and had been working and living together in Noida. While Khan originally hails from Bhopal, Madhya Pradesh, the girl is a native of Bijnor, Uttar Pradesh. 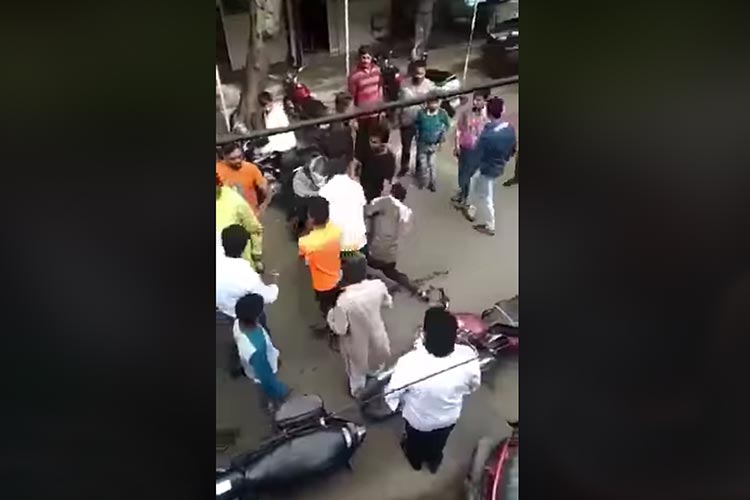 On Monday afternoon, the couple reached the office of lawyer Manoj Tevatia to get their marriage registered.

“They had been sitting in my office for some 45 minutes and I was preparing documents for the registration when a mob came and started thrashing the man. They were shouting slogans of ‘Jai Shri Ram’ and were saying the man was marrying the girl against her will. It appeared that the mob belonged to some Hindu outfit,” Tevatia told InUth.

According to Tevatia, the couple was accompanied by some of their relatives who ran for safety following the commotion.

The incident came to light when a video of the attack went viral on social media. In the video, a group of men can be seen thrashing and dragging Sahil on the road. Police said the girl escaped unhurt. However, she did turn up at the police station following the incident.

Local vendors and shopkeepers said a few policemen posted outside the court tried their best to save the man from assault. However, the mob overpowered them as well.

“There were around 200-300 people. He was beaten ruthlessly and dragged from one end of the street to another. The thrashing stopped only when more cops arrived at the spot and put Khan in the police vehicle,” a local eatery owner, who refused to give his name, told InUth.

SHO of Sihani Gate police station Sanjay Kumar Pandey said the cops took the man to hospital and got him medically examined.

“He had some minor injuries on his face. He refused to lodge a complaint but police has taken a suo motu cognisance and lodged an FIR. During our investigation we have zeroed on two suspects Navneet and Vinod Chaudhary. We have charged them under sections 323, 427 and 147 of the IPC,” Pandey told InUth.

According to SHO Pandey, no arrests have been made in the case so far. 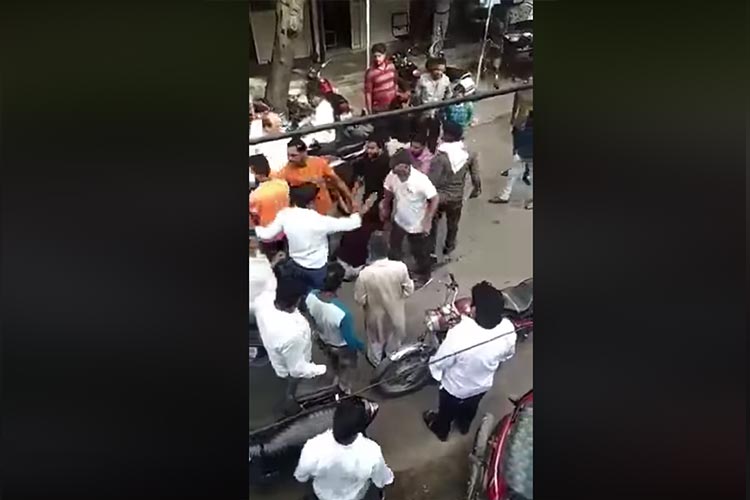 “We are trying to identify suspects on the basis of video footage. We also came to know about the slogans shouted by the mob. We are investigating that aspect as well,” he said.

He also informed that the girl’s parents arrived at the police station on Tuesday and took the girl along with them to Bijnor.

Despite repeated attempts, InUth couldn’t reach the couple for comments.

Officials at the marriage registration department seemed little surprised about the incident.

“These kinds of incidents are common here. Every other day an eloping couple is thrashed here. Either by their family members or some ruffians. We don’t know why this incident became so big,” Kapil, an official at the court, told InUth.