Let’s not mince words. If you are a resident of Delhi, you are breathing in poison pretty much 12 months a year.  Which is why, a report that the authorities have okayed seven major housing projects for central government employees is not exactly making us whoop in joy. As many as 17000 trees in South Delhi will soon be chopped off to make way for Central government accommodations in the area.

The Forest department has given a go-ahead to cut down trees in various areas, including Nauroji Nagar, Netaji Nagar and Sarojini Nagar. In Sarojini Nagar, only nearly 11000 trees are likely to be chopped off.

An official of the National Building Construction Corporation India Limited, a central public sector undertaking, said they planned to plant over 10 times of what had to be cut in the process. 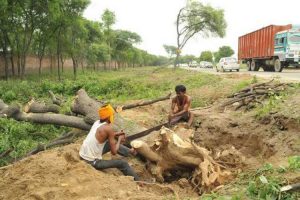 However, environment activists have protested against the proposed move saying, substitute plantation has never been a successful solution for cutting old trees.

“We have never seen compensatory plantation to be a successful solution for cutting old trees. Given Delhi’s pollution levels it is necessary that old trees are not uprooted,” activist Padmavati Dwivedi told PTI.

Environment lawyer Aditya Prasad said the move would be “suicidal”.

“There is no place to grow for compensatory plantations in Sarojini Nagar, Nauroji Nagar and Netaji Nagar. Given the spiking pollution levels, the move would be suicidal,” she told the news agency.

Petition Launched to save Delhi’s trees 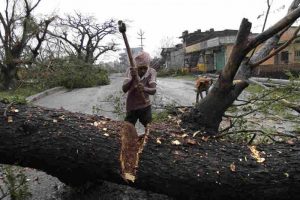 Jhatkaa.org, a Bengaluru-based advocacy organization, has now started a petition to save Delhi’s trees.

Over the past week, the air quality in Delhi was deemed “severe”. So severe that the Delhi High Court sought the response of the Delhi Government to combat the “emergency-like pollution situation”.In the midst of this crisis comes news that the forest department gave permission to the NBCC to chop off 16,500 trees, as part of a plan to redevelop seven neighbourhoods in the city……. In fact 1500 trees out of the 16,500, at Naroji Nagar, have already been axed. Felling of this magnitude will be a huge loss to Delhi’s green cover.”

Social entrepreneur and environmentalist Vimlendu Jha hit out at government while pointing out its decision comes at a time when capital is reeling under unprecedented levels of pollution and 90 percent of city’s groundwater is in critical condition.

South Delhi is being systematically turned into a slum. Kidwai Nagar & Nauroji Nagar already turned into Lower Parel with matchbox apartments. They now plan to chop 16,500 trees down to build homes for babus while flats go abegging in parts of Noida not far from metro to Delhi

Why the hell has PWD cut all the trees on Mathura road? Shameful. Such gorgeous old trees on that road. Is this how Delhi plans to address pollution? Fewer trees = more dust.

Twitter was also aghast and likened the move to killing people

Do not cut down trees in South Delhi for housing. These should be constructed in outer areas. This is like killing lacs of people @MoHUA_India @OfficialNBCC @moefcc @drharshvardhan @AIPCDelhiCentrl

16,500 trees to be felled to build houses for govt officials in Delhi. This is atrocity on our environment. Let us be sensitive about trees, wildlife, water etc.