The importance of Indian voters in British elections cannot be denied due to the fact that there are nearly 1 million migrants from the Commonwealth nationals who can exercise their right to vote in the UK elections. It is with this view that British politicians have often reached out to the Indian community-based in their country to expand their vote base and woo the voters.

In the 2017 UK elections, the Conservatives tried to please the Indians by releasing a song in Hindi! The song titled ‘Theresa ke saath’ saw the current British PM Theresa May in a saree and participating in an arti in Bengaluru. The video also has her photos with Indian Prime Minister Narendra Modi.

Also Read: Do you know even Indian citizens are eligible to vote in UK parliamentary elections

Not just in India, the video also shows May visiting a temple in London wearing a salwar kurta. The video was released by co-chair of the Conservative Friends of India, Ranjit S Baxi. Throughout the video, efforts are made to convince the Indian voters why they should vote for the Conservative party.

Just before the elections, Theresa May had on June 3 visited the BAPS Shri Swaminarayan Mandir in London in what many termed as a way to appease the “minority” population in “UK style”. She along with her husband Philip May performed the ‘abhishek’ ritual. Labour leader Jeremy Corbyn also visited Gurdwara Sri Guru Singh Sabha wearing a saffron turban and met people there. It is not the first time that British politicians are visiting temples or gurudwaras during the election season. It is considered as one of the measures to garner votes from the influential population in the Indian community. 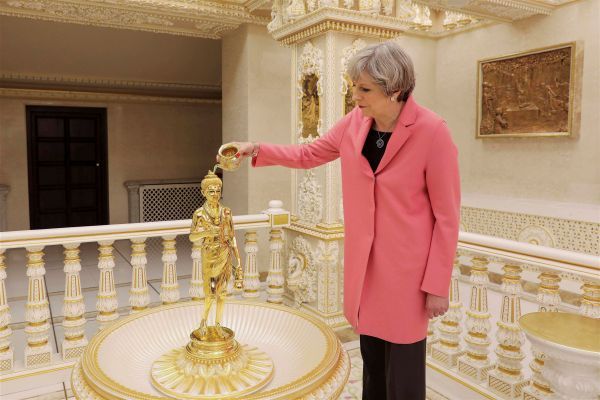 A video like this one was also released before the May 2015 election which featured the then party leader David Cameron along with members of the Indian community. The video, also made by Conservative Friends of India, was titled ‘Neela hai aasman’.

Throughout the campaign to woo Indian voters, Modi’s pictures with May were also reportedly used on posters. 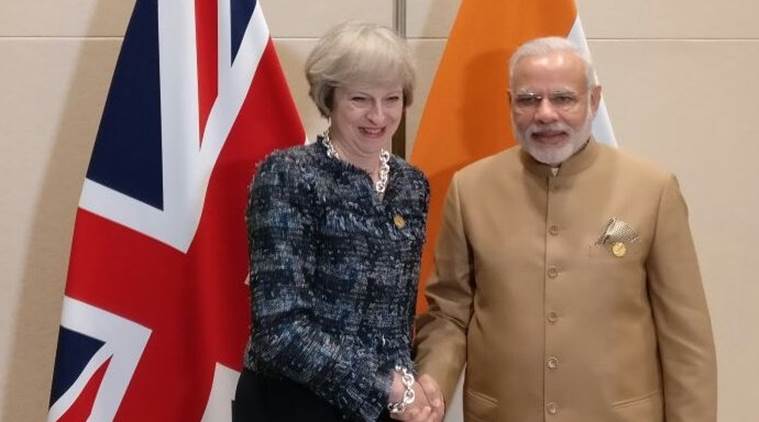 However, in a jolt to Theresa May, she failed spectacularly in her gamble to call early election to boost her position during Brexit negotiations. She was robbed of her parliamentary majority in the results announced on May 8, prompting calls for her resignation. Though the Conservative Party has emerged as the single largest party, the impressive show by Jeremy Corbyn led Labour Party has sent ripples in the British politics. The upheavel comes just before Brexit talks are scheduled to start on June 19.