A groups of Bengaluru based professionals is working to bring joy into the lives of underprivileged kids through a unique initiative.

On Saturday, the group distributed bicycles to over 120 students of Seegehalli government school which lies on the outskirt of the city

Called Freedom Pedals, the initiative was started three years ago by Sampath Ramanujam, a software engineer and founder of the not-for-profit Anvaya Foundation.

Ramanujam came up with the idea after he was moved by the sight of a girl playing “with a old rusted cycle which doesn’t have bell, brake & not even a seat(sic)”. 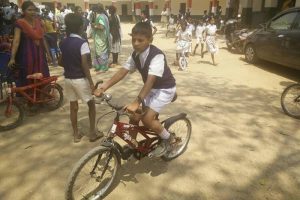 “We started collecting old cycles across Bangalore & distribute them after overhauling & repair to Govt school students in village limits,” he said in a Facebook post.

“Those kids who received the cycles are amazed by the fact that they own a good looking cycle now,” he noted.

They started with donating four cycles in the first year, and 38 cycles last year. This year, Ramanujam’s foundation has donated 220 cycles so far.