A teacher at Delhi Public School (DPS) Rohini gave students a dress code on May 10. But, this guideline was directed only towards the female students, who were told to wear slips along with their bras.

This news started doing the rounds after a post went viral on social media that the school had implemented the “dress code” on girls from classes IX to XII. The post claims that the girls were apparently held back after the assembly and told to wear slips along with their bras.

The diktat also included that the girls were only supposed to wear skin-coloured bras in order to make sure that they are not visible. More buttons would have to be put in place so that there’s absolutely no skin that is visible through the opening between the buttons.

The parent of a child studying in Class XII at DPS Rohini confirmed to The Quint that such a notification has been issued by a teacher. The report also claimed that a few members of the alumni will approach the principal, protesting against the diktat.

“Some girls students are planning to meet the principal. I tried talking to the parents of some of these girl students who seemed to be okay with it (dress code). I’m not ok with it. Even the school alumni are feeling bad about this,” the parent told The Quint.

According to the DPS Rohini website, the summer uniform of the boys mandates a white vest and the girls are supposed to wear knee-length skirts. 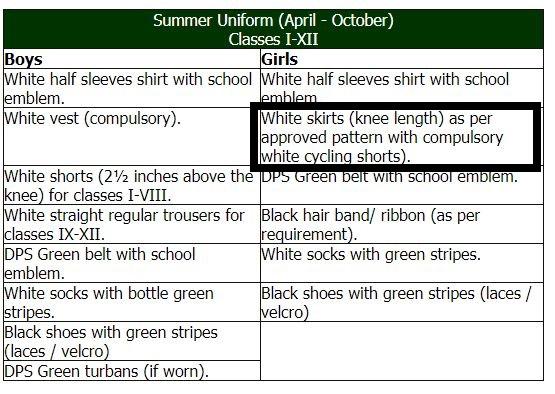 Social media erupted with reactions with some claiming this was a case of moral policing while others claim the girl students were being body-shamed.

Attempts to reach the school administration and students of DPS Rohini failed. This copy will be updated in case one of them respond.