At the narrow road across east Delhi’s Dharamshila hospital, two large makeshift shivirs (resting camps) have been set up for kanwars. Every day, more than 1000 pilgrims visit the two camps for food, water and rest after an arduous journey from the holy sites in Uttarakhand. For the kanwariyas, who often travel in groups, shivirs are set up all across Delhi, Uttar Pradesh and Uttarakhand.

Every year, during Saawan (the Hindu month of monsoons), lakhs of devotees of Lord Shiva known as Kanwariyas visit Haridwar, Gaumukh and Gangotri to collect water from the holy river Ganga. However, every year, they also manage to grab headlines for all wrong reasons.

On Tuesday, a mob of kanwars went on a rampage in west Delhi’s Moti Nagar. The videos that were captured showed them destroying a car in the presence of police personnel who stood there doing nothing. The incident, once again, put a spotlight on the cases of hooliganism and violence in the name of religion. 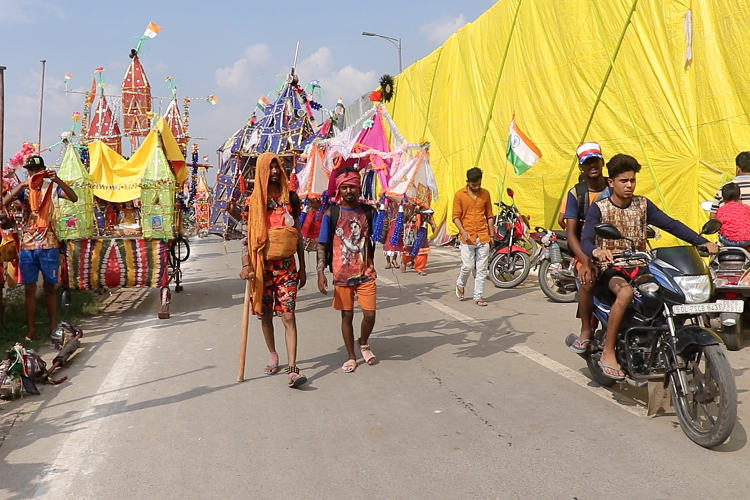 Outside the shivir near Trilokpuri

“If it happens with someone then the others believe that Bhole (the pilgrim) is not to be blamed. They just blindly start thrashing things and people. They don’t ask who was at fault. At that moment, they all stand by each other, they are not thinking,” said Ashish Kanojia, a 23-year-old kanwar, who goes to the pilgrimage every year.

Vicky, 31, another kanwar, talked about an accident that he witnessed a mob kanwariyas attacking a gypsy. “They should have kept calm because accidents can happen to anyone. Kanwariyas think that people attacked them purposefully. Why would anyone attack them for no reason? Accidents just happen,” he said.

Many times, the kanwars also fall prey to rumours and fake news. “When I was in Roorkee, I heard a rumour that Muslims have killed a few Bholes (pilgrims). Later, we figured out that there was nothing like that. People just make a mountain out of a molehill these days,” said Ramesh, another pilgrim.

The kanwars feel such incidents bring a bad name to them and the religion. “95 per cent of the pilgrims just want to complete their pilgrimage, they don’t mess around with people. The rest bring bad name to kanwars. Thee are some who want to undertake this pilgrimage to just have fun, they get into brawls,” said Viresh Aggarwal, the organiser of the shivir near Trilokpuri.

He also had a word of advice for Kanwars. “The bholes should keep their cool, even if some untoward incident happens, they should brush it aside,” he said.

But not everyone is critical of the violence and the hooliganism that takes place in the name of religion. Mahendra Kumar Bansal, one of the volunteers at the camp, who liked to identify himself as sewak (servant of the Lord) justified the violent nature of the mobs. He blamed the public for instigating kanwars. “There are some anti-social elements who mess with Bholey ki sena (kanwar pilgrims). The sena will not leave them. If people mess with them, they will have to pay for it. When Shiva is in his rudra (fierce) mode, no one can stand in front of him,” he said.