A video of a man molesting an underage girl on the grounds of a local fair in West Bengal has been widely shared on social media platforms across the state. The video, which has received over 2,000 shares has also been shared on Kolkata Police’s page by multiple Facebook users. The rumour doing the rounds on social media is that the incident occurred in Chinsurah, a town less than 50 kms away from Kolkata. However, it was later found out that it happened in some other place.

The video was first shared by the page, Eknojore Hooghly Chuchura, a page that claims to keep a tab on all the happenings in and around Chinsurah and is listed on Facebook as a “media/news company”. The admin of the page, Shubhadip De told InUth: “I received the video on WhatsApp. It was a forward from someone I know so I just shared it with the same caption that claimed that the incident had occurred at the Chinsurah handloom fair that started on June 3. Since I am resident of the place, I was disturbed by the video and decided to share it on my page. The co-admin and I thought we would spread the word faster through social media and expedite the process of apprehending the disgusting man.” 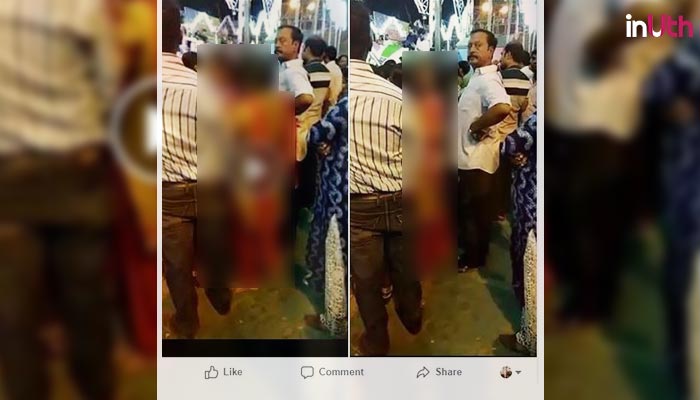 While Dey’s intentions for sharing the video was to apprehend the accused, it occurred to him much later that there was a need to verify the source and the location of the footage. “I quickly got in touch with the authorities at the handloom fair. They told us that an announcement can be heard in Hindi at the fair, which is not done at the Chinsurah handloom fair. They also pointed out that the video was not shot at the grounds where the Chinsurah fair is held because the surroundings did not match the actual location.”

The post has now been taken down from the Facebook page and an apology has been posted. “We have taken down the video. We have spoken to the fair authorities about the episode and they have confirmed that the video was not shot at the Chinsurah fair. We apologise to have spread this kind of gossip, but we can’t just pass it off saying that it’s as simple as gossip because we received the information from our sources. We will try to prove that the incident didn’t occur in Chinsurah.”

Since the child is underage, a case would be registered under the Protection of Children from Sexual Offences Act (POCSO Act), however, no formal complaint has been lodged and police investigations are on. “See, we cannot take any action right now because the case is not in our jurisdiction. What that man was seen doing in the video is undoubtedly disgusting, but we have to follow the law. We are investigating and will hopefully figure out where the incident occurred and are trying to figure out the identity of the man,”a police official from Chinsurah police station told InUth.