Uttar Pradesh Police came to the rescue of a poor man who had decided to sell his one-year-old baby to a childless couple to get his pregnant wife treated. Reports differ as to whether it was a male or female child he was trying to sell.

Arvind Banjara, a daily-wager from Kannauj, had admitted his seven-month pregnant wife Sukhdevi in District Hospital when she developed complications. The doctors told Arvind that his wife is anemic and five units of blood would be needed for transfusion, Hindustan Times reported. Since he had no money and could not arrange it through friends and relatives, he tried to sell his child for Rs. 25,000 to raise the funds.

“In the district hospital, we were told to get blood for her. They told me that she will not survive if blood is not arranged for her. I didn’t have money, so I had no other option, but to sell my child,” ANI quoted Arvind as saying. 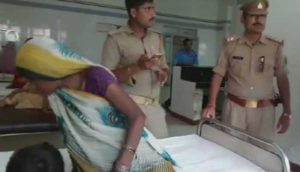 But the police caught Arvind red-handed before he could actually go through the deal. Upon interrogation he confessed but also narrated his ordeal. The police, instead of taking action, decided to help the poor man. They pooled in money and donated blood for his ailing wife.

“We got to know a couple needed money for treatment and was trying to sell their child to arrange for money. When we found out that the woman is suffering from bleeding and needs help, the Tirwa police station decided to provide full financial aid to the family,” Tirwa police station officer, Amod Kumar Singh told News18.com.