A widely circulated image of a 45-year-old Muslim man being dragged by villagers in the presence of three cops in Uttar Pradesh’s Hapur has forced the state police to issue an apology.

On Monday, Qasim, a cattle trader was beaten to death while Samiuddin (65), the person who was accompanying him suffered severe injuries in the incident. In the photograph, Qasim is seen being dragged by 4-5 men with his clothes torn and bloodstains on his arm with three policemen at the forefront. One officer is busy on his phone, while another looks angry at the person clicking the photograph. He was declared brought-dead by the hospital.

““We apologise for the insensitive manner in which the victim was handled by our policemen. All the three policemen seen in the picture have been transferred to police lines and an inquiry has been ordered in the incident,” the UP Police said in its statement.

We are Sorry for the Hapur Incident.
Law & order incidents often lead to unintended yet undesirable acts. pic.twitter.com/w5Tsen9UxG

In its clarification, the police said “..This picture seems to have been taken when the police had reached the spot to shift the injured to a police vehicle and because of non availability of an ambulance at that moment, the victim was unfortunately carried this way.”

Police claims it was a road rage incident

While the local police maintains it was a fallout of a roadrage incident. According to the FIR filed at Pilakhuwa police station, the incident was triggered by a scuffle between unidentified bike-borne men and Qasim and Samiuddin.

“The family of the deceased has given us a written complaint stating that the fight and consequent thrashing started after a motorcycle accidentally hit Qasim and his friend. While one person was killed, another one has sustained injuries. An FIR has been registered against 25 unknown people under IPC’s sections 307 (attempt to murder) and 302 (murder), while two men have been identified and arrested,” Hapur Superintendent of Police Sankalp Sharma told News18.com. 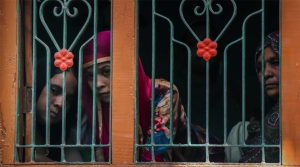 However, according to a report in Indian Express, the families of the victims have alleged that the attack was due to a “cow related matter”. Even the two alleged attackers arrested in the case have also said that the assault was related to cattle smuggling.

Speaking with The Quint, Samuiddin’s nephew Abdul said a cow and a calf had strayed into the fields and his uncle with Qasim and other three friends were trying to shoo them off when a mob from the other side attacked them. All their friends fled the scene while Qasim and his uncle were thrashed and dragged to the temple.

Meanwhile, the police is waiting for the testimony of Samiuddin who is undergoing treatment at a hospital in Hapur. “We are waiting for the injured person to complete his treatment and be well enough to talk to us. Only then we can go ahead with the investigation,” ASP Ram Mohan Singh told The Logical Indian.

Killed For Being a Muslim

While Qasim’s younger brother Mohammad Salim alleged there was no cow involved, his brother was killed because he was a Muslim. 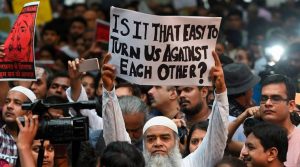 Others in the village said locals were on edge following rumours that cow smuggling was afoot.

Viral Video of The Alleged Lynching

A video of the incident has also surfaced in which a badly injured Qasim is gasping for breath and asking for water before finally falling on grounds. The police is yet to acknowledge the video incident. A voice asks people to calm down since they have already beaten the man and requests the mob to give him water. Soon after, another person is heard saying that cows were tied in the fields for slaughter.