A Dalit Man in Uttar Pradesh’s Badaun was allegedly assaulted and forced to drink urine by a group of men after he refused a harvest job on their field.

Four brothers accused of beating the man in Hazratpur of Uttar Pradesh’s Badaun district were arrested from their village early Tuesday, police said.

Sitaram Valmiki, who owns a small farm, said, he was harvesting his wheat crop when farmers of the ‘upper caste’ asked him to harvest their crops first.

After Sitaram refused them, they tied and dragged him “all the way to the village and thrashed him with sandals,” he told news agency ANI. 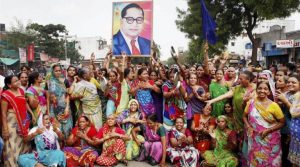 “They pulled out my moustache and even made me drink urine as shoes and slippers came raining down on me,” alleged Valmiki.

“The accused Vijay Singh and his three brothers were arrested in a raid in Hazratpur area. They are being interrogated by a police team and will later be presented in court,” superintendent of police (city) of Badaun, Jitendra Kumar Srivastav told Hindustan Times.

Uttar Pradesh SC-ST commission has also sought a detailed report from Badaun police regarding the incident.

The victim’s wife’s initial call to the police about the assault went in vain as they failed to take any action, The Hindu reported. However, the woman did not give up and complained with the Dial 100 police emergency service to save her husband.

The Station House Officer of the concerned police station in Hazratpur has been suspended for negligence of duty.