Despite growing by leaps and bounds in several fields in last seventy years, there are certain professions where a woman’s presence still makes heads turn. One such profession is that of a bus conductor. However, woman are gradually making inroads into this profession as well.

A differently-abled mother of two daughters has become the first woman bus conductor in the state, PTI reported.

Landed this job after a long struggle

32-year-old Sharmilla, who hails from a village in Rewari district, got this opportunity post a recruitment drive by Haryana governnment which was launched in light of the ongoing strike by the state roadways employees.

“Both I and my husband were unemployed. We are raising two daughters. I had been looking for a job for last 8 to 10 years and when I learnt about this vacancy, I applied against it and got the job,” she told PTI.

Despite suffering 40% disability in one of her legs, the 32-year-old never let disability come in her way.

“I am Haryana’s first lady conductor and I am so happy to get this job. I have joined my duties three days ago and have learnt most of the things related to ticketing,” said Sharmilla proudly. 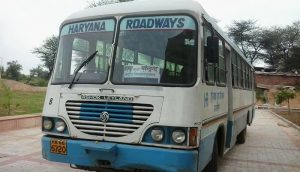 Sharmilla is among the two women who were recruited as bus conductors, the other one being Nirmala Rani, who has joined duty on Sirsa-Ellenabad route.

Earlier this year, 30-year-old Archana had become the first and only woman driver of the Karnal city bus service.

Haryana Roadways drivers’ union on Monday decided to extend the ongoing strike by another four days till November 2 as fresh talks with the government has failed . On Tuesday, the strike entered its 15th day. Haryana has about 19,000 employees in roadways services. The state roadways department is catering up to 12 lakh passengers daily with a fleet of 4,100 buses.