An old street dog came to the rescue of a city-based doctor after he suffered paralytic attack at his home in Pune’s Swargate. 16-yr-old Brownie alerted Dr Ramesh Sancheti’ neigbour with her incessant whines.  She also tapped at his window with her nose, Pune Mirror reported.

On hearing the canine’s howling, one Amit Shah, who lived at the first floor of the same building came with food thinking the dog was hungry but the dog refused to eat and poked her nose towards Sancheti’s window. The dog’s peculiar behaviour alerted him and he peeked into Sancheti’s window and saw him lying motionless on the floor.

“She kept rearing up with difficulty and placing her front legs on the window, looking inside. Initially, I was quite confused, but when I went nearer, a gap in the window revealed to me that the doctor had collapsed on the floor…” Shah told Pune Mirror. 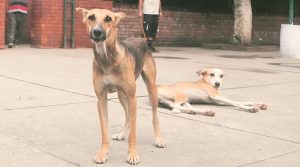 Shah quickly flung into action and broke the window pane. He eventually opened the door lock and rushed Sancheti to the hospital. Sancheti, according to doctors attending him, is now out of danger.

Sancheti’s son Amit Sancheti owes his father’s life to Brownie. “It was only the dog who alerted Shah and saved my father’s life,” he told the daily.

The dog seems to have repaid an old debt that she owes to Sanchetis. Two years ago, the canine was suffering from an ailment that had severely affected her kidney.

During this time, Sanchetis took good care of the dog, helping her recover from the 50 per cent kidney failure.