“During the first year of my college at IIT Delhi, I, along with some of my friends went on a Himalayan trek when a friend came down with urinary tract infection after using the public toilet. We already knew that lack of hygiene at public toilets is a genuine problem but after this incident we decided to find a sustainable solution to it,” says Archit Agarwal who along with his classmate Harry Sherawat, both in the third year of textile engineering at IIT-D, have developed a “stand and pee device” for women to avoid dirty public washrooms. The device claims to give women the freedom to stand and urinate. Designed at IIT Delhi, the device was given a go-ahead by All India Institute of Medical Science, Delhi, after a slew of successful trials. The device, ‘Sanfe (Sanitation for Female)’, was launched on the World Toilet Day Monday. It is priced at Rs 10.

The duo approached Prof Srinivasan Venkataraman, who works in the design department at IIT Delhi, with their idea and the former helped mentor the duo in developing the product design.

The device has been launched with a #StandUpForYourself campaign under which about 1 lakh free product samples will be distributed to women across the country. 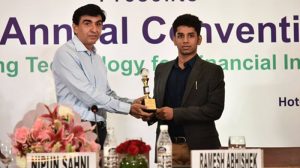 “We are distributing 1 lakh free samples of Sanfe all over India under #StandUpForYourself under a social media campaign to make the product more popular,” Archit told inuth.com.

Underlining that the product is a tool to empower women, Archit said that Sanfe is useful for travelling woman as they won’t have to squat on the dirty urinals, where they could be exposed to germs. Besides, the product is biodegradable and ergonomically designed. The coating material of the product is water resistant in nature. Women can also use this during their menstruation cycle.