On the intervening night of 17-18 May when 30-year-old Amit Gupta, a resident of Rohini was returning from a party his car hit a  bike. He didn’t know this incident would result in days of torture, harassment and trauma for him and his family. The bike he hit was that of Delhi Police constables. The constables fell from the bike. When Gupta went out of his car to check on them, he was greeted with beatings and abuses. Eventually, he was taken to Ambedkar Hospital for a medical check-up to check whether he had consumed alcohol or not. The report stated that he was drunk. Speaking to inuth, Gupta’s wife Megha confirms that he was indeed drunk but accused that the police constables were also drunk. “The Policemen refused to tell the doctor that he had sustained injuries. When my husband  drew their attention towards an injury in legs, the doctors said chal aage ja,” says Megha.

In the meantime, Megha says the two constables called two other police personnel and together took him to Prashant Vihar Police Station in Rohini. “His phone was snatched away and switched off. He was beaten with belt and lathi all night. He was shown an iron rod and even a revolver while being threatened that he would be killed” said Megha. His ordeal ended only at 6 am, the next morning. He was allowed to call up his parents. But the story that was given was different.  The family members were made to believe that Gupta’s car had badly injured two constables and damaged their bike. “We were told that that two constables were lodged in Ambedkar hospital and that their bike was damaged. They demanded Rs 2 lakh as compensation. Ambedkar is a government hospital, the bill cannot be so high. Further, when my in-laws wanted to meet the two constables, they were told that they had already been discharged. Somehow after much bargaining they struck a deal and gave the police constables Rs 60,000 and brought my husband home,” said Megha, mother of a 3-year old. 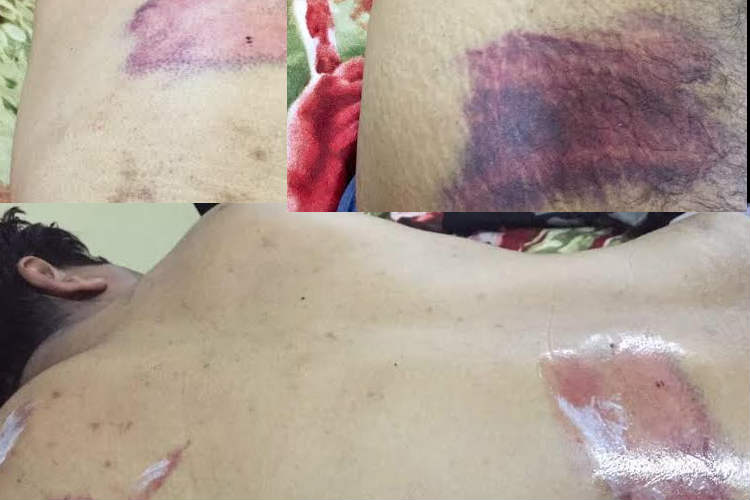 Amit Gupta was allegedly beaten up with baton and belt

The whole incident has had a chilling effect on the family. “Ever since this incident, he has been feeling depressed and suicidal,” Megha says.  Their 3-year-old son has been badly affected by the torture marks on his father’s body. “He tells his naani(grandma), don’t buy me a bike naani or else police will beat me up like they beat up father,” Megha says. 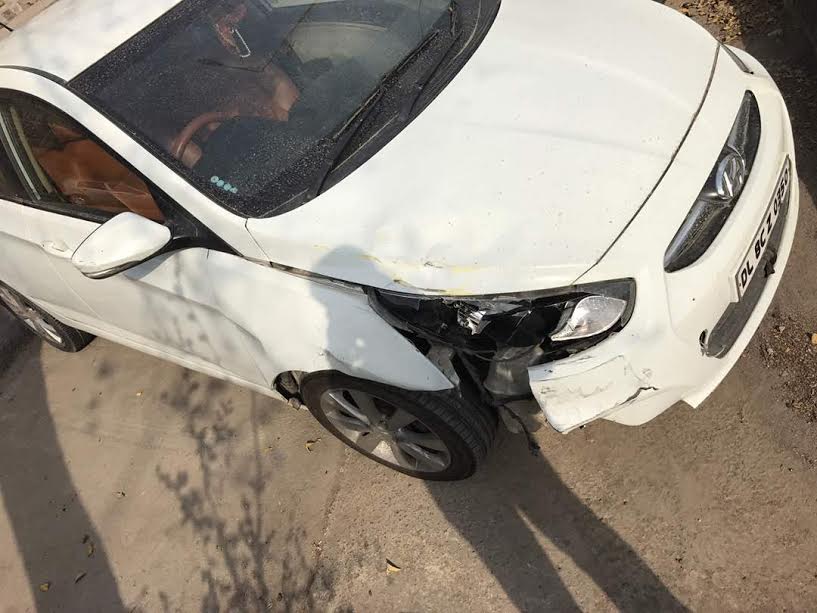 Amit Gupta’s car that hit the bike of Police personnel

The family has, however, decided to fight back. They were also supported by their community members. 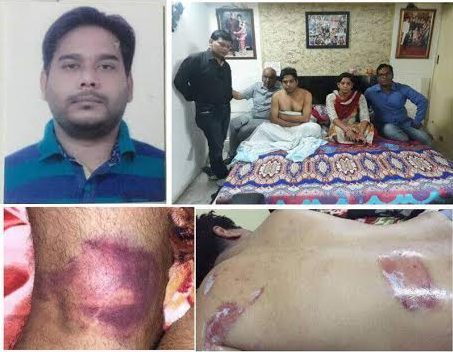 Amit with his family members.

When Prashant Vihar Police station refused to lodge their complaint, they reached out to the the Assistant Commissioner of Police and the Deputy Commissioner of Police. The DCP, Megha says listened to their complaint and also asked the SHO of Prashant Vihar Police station to make the CCTV footage of the fateful night available to Amit’s family. An internal inquiry has been ordered and  four officials involved in the case have been suspended. However, Megha says that they aren’t satisfied with the action. “We want an FIR lodged and seek their dismissal. Suspension is not enough”. 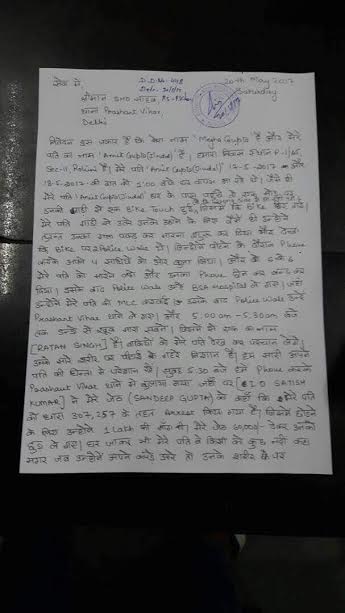 Copy of the complaint. Gupta family wants the constables to be dismissed and an FIR lodged

Meanwhile, they have not been given back the Rs 60,000 they allegedly gave away as bribe to the police constables.  Amit’s sister-in-law Ashima, who spread the word on social media with a Facebook post says that the family has been receiving threats and is under pressure to withdraw the case. They want the SHO to be suspended as well.  Ashima alleges that the SHO of Police station was present when the bribe money was being negotiated on 18 May, something Megha backs up and claims is also shown in the CCTV footage. When we contacted the SHO, he refused to speak on the matter saying he is not authorised to give statements to the media.