Minister of State for Home Affairs Kiren Rijiju is very active on Twitter. He misses no chance to display his Twitter-savy side. A few days back he had us in splits for sharing the bizarre RTI queries the Home Minsitry gets, the standout of all being a gentleman seeking information on India’s preparedness to combat a zombie apocalypse.

The subject matter is too scientific.
This kind of RTIs will waste the precious time of the office staffs. pic.twitter.com/gVWbqt53PY

But as we know, Twitter is a democratic space and bad days are equally distributed among all users. Even the most experienced players on this platform make mistakes and then suffer the troll attack.

On Monday, Rijuiju made veiled potshots at filmmaker Anurag Kashyap for dragging the Prime Minister in the whole Ae Dil Hai Mushkila and ban on Pakistani artiste fiasco. Without naming the director, Rijiju said Kashyap was doing so just to stay in news. He called the act of “questioning the PM”a “a new fashion”.

A new fashion has developed in India. A student or a film person can put a question or speak against PM without any logic to get into news.

But before Rijiju could have basked in the pride of having scored a brownie point against Kashyap, a Twitter user grounded him. 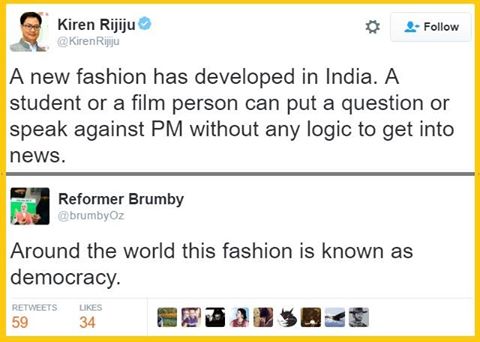 That’s perhaps the best response to a poorly thought out tweet from a cabinet minister.

Indeed, in these times of hyper jingoism and bans, when any criticism of the government is branded anti-national, we need to remind ourselves that we live in a democracy. That freedom of speech and expression is our birthright.

We should and we must question the PM, the government and its policies. And Anurag Kashyap like every other citizen has the right to raise his concerns with the PM. No one can shut him down by calling him an attention seeker.

We do have the right to know if the government endorses the demands of ban on Pakistani artistes from some political quarters.

We do need to know whether the government denies to provide protection to a film just because it stars a Pakistani actor while jeopardising the hopes of many Indians who have invested in the film and most importantly that of  cine-lovers.

More power to Tweeples for reminding our representatives that we will not stop questioning those in power as it is our right.