After cross-border airstrikes between India and Pakistan, the Airports Authority of India on Wednesday temporarily closed civilian operations for nine airports in the country. Flights at Srinagar, Jammu, Leh, Pathankot, Shimla, Kangra, Kullu-Manali and Pithoragarh airports were suspended after tensions escalated between the two nations. Moreover, the Jammu-Srinagar National highway, the only all-weather road linking Kashmir with rest of the country has been closed since Monday following major landslides.

As road and air traffic continues to remain affected in Kashmir, many tourists presently are in a state of confusion. Sensing the gravity of the situation, a hotel in Srinagar is offering free food and accommodation for every stranded tourist.

The post has already got close to 3,000 shares with many appreciating the move. 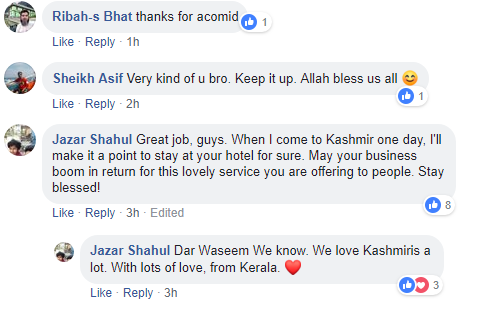 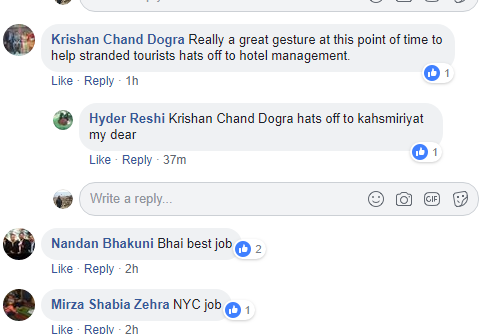 “It is nothing but a humanitarian gesture, ” Sheikh Kaisar, owner of the hotel told InUth. “Even though the situation right now is completely normal, tourists might have apprehensions since road and air traffic has been suspended. That’s the reason why we decided to provide basic food and accommodation free of cost,” he adds.

The hotel which is situated in the heart of the city can accommodate around 60-70 guests at any given point of time. But Kaisar says he isn’t keeping a track on the number of guests so as to not sensationalise it among his staff. “We have guests coming in and going, including foreigners. We will keep providing it till the situation is improved,” he told us via a telephonic conversation.

For Kaisar, the spate of attacks against Kashmiris in the aftermath of the Pulwama terror attack was a big letdown. But that hasn’t stopped him from organising this gesture. “I want to bring out the right message. This is the idea of Kashmiriyat,” he adds.