How many of us remember our basic civic duty to keep our surroundings clean? Aren’t citizens as responsible as the government for keep cities clean? This is a question that Indian Revenue Officer Satyakam Dutta wanted to tackle in his mockumentary, ‘Finding Beauty in Garbage’.

The movie, which was released on YouTube on Tuesday, has already received accolades in several film festivals across the world. When Dutta was transferred to Assam’s Dibrugarh, he had no idea that he would take the filmmaking route to voice his grievances about the city’s waste problem. The Hindu reported that the film aptly depicts how people are comfortable in coexisting with garbage being dumped all around them. It made Dutta wonder whether people found beauty in littered streets.

Dutta finally put pen to paper and wrote the script a year-and-a-half ago, and found two volunteers to execute the idea through a film. Incidentally, it were his wedding photographers, looking for a break from weddings, who decided to help him out. “They were assigned to photograph my wedding in October 2016. They offered to work without any fee because they wanted to break from the monotony and hoped to earn some name,” Dutta told The Hindu.

In the documentary, Dutta makes a mocking commentary on how the mounting waste across town is also helping the city’s shops economically and increasing the aesthetic appeal of the place. A shopkeeper quoted in the film claims how people can identify his store by locating the garbage bin nearby. 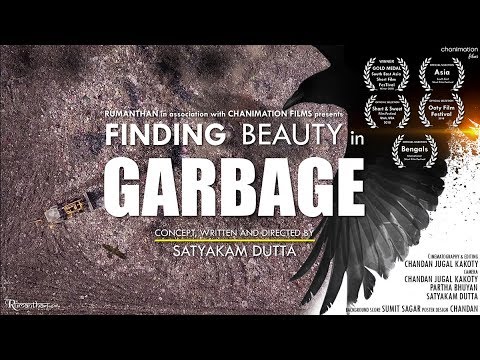 Screengrab of the documentary

The IRS officer’s satirical perspective on how garbage increases the appeal of a locality has won ‘Best Short Documentary’ in the Asia South East Asia Short Film Festival at Phnom Penh, Cambodia. It has also been shortlisted for official screenings at several other festivals, Guwahati Plus reported.

Dutta is not entirely sure whether he would like to make more films despite his mockumentary’s success, however. All he wants is to bring about some change in the indifferent attitude of the city’s inhabitants. “For me, I think the biggest achievement would be to actually see some change in my city. To know that my film is making an impact and bringing about the necessary change,” said Dutta told G Plus.